In addition to all the big changes around the Mets during the offseason, Willie Randolph (himself one of the changes) ushered in a new one on the first day of workouts in Port St. Lucie.

Taking a cue from his former employer over in the Bronx, Randolph dictated that there will be no facial hair (see last note), other than mustaches, on the Mets.

Call them the New Razor Mets.

At least Mike Piazza won’t have to make any more decisions on how to wear his face. 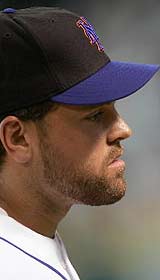 This just won’t cut it … 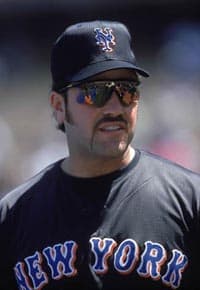 Neither will the ridiculous fu-manchu … 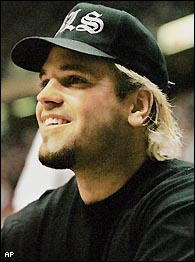 And, mercifully, no chance of the man-gina returning.

The Mets have also changed spring training (and, we can only assume, batting practice) jerseys. I’ve expressed my displeasure with their black jerseys in the past, and these just look ridiculous. 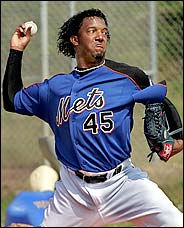 The NHL season may be cancelled, but the team sweaters were recycled.

The black swatch on the shoulders makes them look like hockey sweaters.

As ridiculously garrish as they were, I prefer the orange ones they wore the past two seasons. 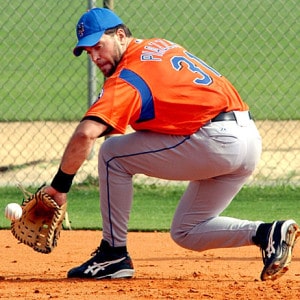 Though shades of the Houston Astros c. 1982, I liked the orange-and-blue.

*****
The college baseball season has begun in earnest, in my mind, because the top northern schools have made their first trips south to open their seasons.

Notre Dame charged out of the gate with an 18-3 win in Orlando. Their nine hit batsmen were one short of an NCAA record.

New Jersey’s top team, Rutgers, also opened with a victory in the college debut of former Little League World Series star Todd Frazier (see third story in link for a picture of little Toddy). The infielder, who was drafted by the Rockies last summer, went 3-for-4 and homered in his second at bat. I’m not sure yet if his move to third base was because of the incumbent at RU or more for Frazier’s benefit, but it will be interesting to see how well he develops and how high he climbs when it comes time to call his name again on draft day.

« Then and Now: The Springfield Nuclear Nine
Wright on track »