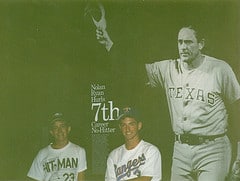 Matt and me and Nolan

I first went to Cooperstown in 1988, when my family stopped over for a night in August on our way to Boston and Maine for our regular summer vacation. The second trip came in 1992, when we went — and my sister and I each brought along a friend — for Tom Seaver’s induction into the Hall of Fame. That’s the origin of this photo, Matt and myself next to a display after a long day of touring the Hall. I’ve long wanted to go back, not really caring when, and in fact thinking I’d do it in the offseason, when it would both be less crowded and, at least for lodging, cheaper (not to mention easier to reserve).

Then, rather suddenly last Saturday, it was determined that Casey and I will be going to Cooperstown on Thursday to spend the night. Friday is our fifth anniversary and in discussing what we wanted to do this year, we weren’t really keen on another fancy dinner in New York City, which we’ve done for each of the past four. Last year, after reading a story in The Times about Block Island just after the summer season, I suggested that a four-day weekend on the island would be a good fifth-anniversary trip. But as September approached, we re-evaluated and determined four days away wasn’t in our best interests, so we started thinking of other options.

Casey brought up the idea of using our National Parks Pass, bought in March and thus expiring in March 2011, but there’s not much outside of NYC/NJ within four hours where we could use it. So I started putting into Google Maps random destinations to see how long the drive was from our home. Gettysburg fit within four hours, as did Cooperstown. I suggested the latter but played it down. Casey, after briefly perusing some dining options in town, was more enthused. “Let’s do that,” she declared.

So we booked a room at the Tunnicliff Inn, with plans to drive up on Thursday after Casey finishes work at noon, walk around town to decide where to eat, and then spend Friday at the Hall. We don’t have a set time to be back, other than before too late Friday, because Casey has to work on Saturday morning.

Strangely, though, each day seems to have brought a new Cooperstown connection since we decided on this quick getaway. First, the Hall will be featured on Wednesday’s “Ghost Hunters” on SyFy. And then there was this post on Baseball-Reference about the recent visit by one of the site’s editors.

Before deciding on Cooperstown, we consulted the traditional anniversary gifts and saw that the fifth is wood, but that didn’t give us any ideas. So now we’re wondering if we should mark the occasion with a personalized bat. It’s much better than the designated modern gift: silverware.

Beyond our lodging, the Hall of Fame and Friday’s lunch, I don’t think we’ll plan much ahead of time. With Thursday morning now open, we can leave earlier and get into town to have a slightly later lunch on Thursday afternoon, then take more time to walk around a bit. We’ll decide where to eat that night after we’ve checked out a few places in person. That Baseball-Reference post already has me eager to walk around the village for the first time in 18 years and see how it stands up to the memories of my 16-year-old self. And I wonder if I’ll remember anything from inside the Hall that isn’t in the photos I took or the video Matt and I made as we walked the galleries. (A video I hope to soon digitize, though it won’t be before this trip.)

A quiet, start-of-autumn getaway to the shores of Otsego Lake should be the perfect break from hectic city/suburb life and a nice chance to recharge before the craziness of October.