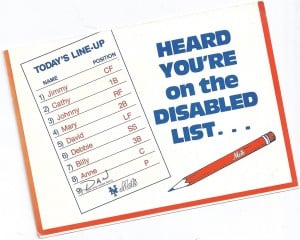 As a kid, I played baseball from sometime in maybe the second grade through my junior year of high school. When I wasn’t good enough to make varsity before my senior year and realized that I would be practicing every day and playing sparingly in games, I decided to enjoy the spring afternoons with my friends.

But I think my development had stalled four years earlier. In the spring of 1990, as I was finishing eighth grade, I was asked to play on a local all-star team. I think it was in Colt League, but I can’t be sure. It would’ve been a chance to play a higher level of competition before getting to high school. Maybe if I’d had that opportunity, I’d have handled the transition a bit better. Or maybe I would’ve learned then that the Red Bank JV would be the best I’d ever do.

I didn’t get that chance, though. On the final day of Easter break, I was pitching in a scrimmage on a field less than two miles from my house. I had friends on my team and knew some guys on the other team, but because it was just a scrimmage, my parents didn’t come to watch.

I threw a wild pitch with a runner on third. He broke for home; I ran in to cover the plate. The catcher tossed me the ball as I slid in; I caught it and turned to tag the runner in one motion. My arm was straight, elbow locked. The runner — a year younger than me and actually smaller (I’d max out at 5-foot-7, 140 pounds in high school, so that probably should’ve been another clue at my baseball future) — didn’t slide so much as jump into me. I broke my arm, both bones just above my wrist. I’ll save the graphic details, but let’s just say that there was no doubt.

I looked down and couldn’t believe what I saw; I was in immediate shock. I looked up and saw my coach, one of the player’s dads who was serving as home-plate ump, and he was speechless. I shook off my glove, held my arm and walked to the bench. Someone handed me an ice pack before the father of my best friend, Will, put me in his car and drove me to the emergency room, but not without stopping at home to tell my mom to follow us over. 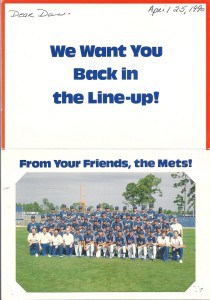 The doctor fitted me for a cast that went halfway up my upper arm, immobilizing it in an L shape for about four or six weeks. I desperately wanted to go to school the next day, but my parents insisted I stay home. It was the only day I missed that year. (For some reason, just once in my life, I wanted to have perfect attendance. I did it sophomore year of high school and then didn’t hesitate to take a “day off” junior and senior years.)

Needless to say, I missed that entire baseball season, though I went to all the games, kept score and compiled stats. The cast was cut down to only my forearm after those initial four or six weeks and I was once again able to bend my elbow. Unable to not pick up a bat for an entire summer, I played Wiffle ball by learning to bat left-handed, though because I couldn’t — in baseball terms — break my left wrist, most of the swing was one-handed. I modeled it after Will Clark’s sweet, smooth stroke.

Though I had a waterproof fiberglass cast, the padding beneath it was cotton, so I showered with a series of New York Times delivery bags rubberbanded to my arm to keep it all dry. But after a class outing to a pool in June resulted in a wet cast, I couldn’t let it keep me from my summer fun, so I occasionally swam with it on despite the lingering dampness and eventual odor akin to that of wet dog.

I recall all of this now (though two weeks later than I had originally planned after I found the hospital bracelet, dated April 22, 1990, and realized it has now been 20 years) because I came across the card I’ve scanned in here. During one of those first days after the accident, my mom wrote to the Mets and explained what had happened. A few more days later, this card with a photo of the 1989 team arrived, along with the 1990 media guide and perhaps one or two other things that may have been misplaced over the years. But I still have the media guide, this card and the hospital bracelet, all of which now take me back to that spring and summer when I began to make the transition from trying to be a baseball player to learning more about the statistics side and enjoying that aspect of it.

If only I’d found this card last year — I could’ve made new copies and sent it out to the likes of Jose Reyes, Carlos Beltran, Carlos Delgado … 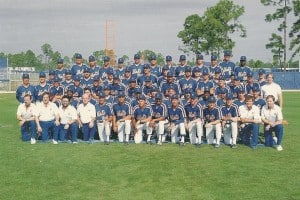