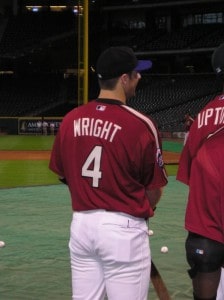 One of my few photos from the 2004 Futures Game BP session.

I don’t know if it came from knowing his name when he was in the South Atlantic League in 2002, when I was covering the Lakewood BlueClaws, but starting last spring, I was anticipating David Wright’s arrival at Shea Stadium throughout last season. I happened to be there the night he hit his first Shea homer, and if I were to buy another jersey with a name on it, a Mets No. 5 would be the one. So to read Jon Heyman’s recent column was a great indication of what’s in store for this kid. Hopefully third base will be his at Shea for a dozen or so years.
*****
Now, as for those new Mets spring training jerseys that I said I didn’t like, I may have found another reason, in addition to the fact that they look like hockey sweaters. 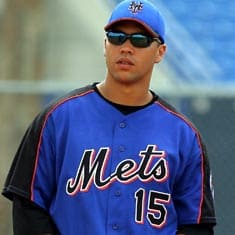 A blue jersey with black stripes … 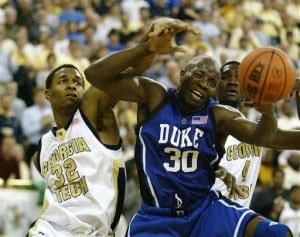 I knew I saw that somewhere.

Is it me, or do black and blue just not look good on sports uniforms? I’ve never liked them together with the Mets.
*****
Newsday also has a hilarious Mets photo gallery that shows the guys having a little fun during drills.
*****
I have to agree with tiny Jayson Stark head that Barry Bonds doesn’t know what he’s talking about in a lot of areas. I’m sorry, Barry, but you can’t say, unequivocally, that all the reporters are liars. You can’t say that baseball is “the only business that allows you guys into our office.” Yes, it’s a business, but your part of it is a game. The business aspect is handled upstairs, in the front office. And the playing field is your office, but it’s not an office. The reporters aren’t allowed into the dugout during a game, where the decisions are made. They aren’t allowed into the trainer’s room, where players are treated. They aren’t allowed into the bargaining sessions where you negotiate your contracts. You might have noticed, Barry, that there are a few other professions where reporters — and the public — are allowed into “the office.”

Sorry, Barry, but you’re not the victim. I’m glad you enjoy the “Bonds sucks” chants, because there are a lot more people who feel that way than those who are looking forward to your potential 756th home run.