I love this thought:

There’s a man in Mobile who remembers a triple he saw Honus Wagner hit in Pittsburgh 46 years ago. That’s baseball. So is the scout reporting that a 16-year-old sandlot pitcher in Cheyenne is the new “Walter Johnson.”

And also this one:

In baseball, democracy shines its clearest. Here the only race that matters is the race to the bag. The creed is the rule book. Color is something to distinguish one team’s uniform from another. 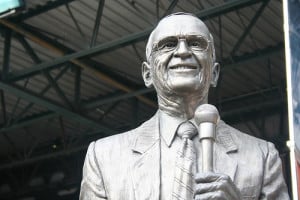 Those are from “A Game for All America,” an essay written for The Sporting News in 1955. The author became famous for the words he spoke more than those he wrote. It was Ernie Harwell, the longtime voice of the Tigers who passed away last night.

I don’t have any personal memories of listening to Harwell on the radio, but I do recall summer nights when I’d lie in my New Jersey bedroom and slowly turn the AM dial on my radio and see what ballgames I could tune in from across the Northeast. I don’t know that I ever got a WJR affiliate, but I know I heard the radio voices of the Blue Jays, Indians, Pirates and Orioles in addition to the much-closer Mets, Yankees and Phillies. And Harwell just fits that memory, even if I can’t recall a specific game I heard him describe.

Ernie’s death reminds us that there aren’t many iconic announcers left. On a national level, Vin Scully may be the only one. Loud noises and flashy graphics and the announcers that fit the mold just can’t come close to the subtle storytelling of the Scullys, the Harwells, the Bob Murphys and the Harry Kalases. Harwell, Scully and other broadcasters of yestercentury became nationally known because of coast-to-coast broadcasts on ABC, CBS and NBC (radio and TV). Their counterparts of today on Fox and ESPN just shout at us.

On the local level, there’s Bob Uecker in Milwaukee, Jerry Coleman in San Diego, Dave Niehaus in Seattle. And though many of us know Uecker from national broadcasts, Major League, beer commercials and Mr. Belvedere, he’s a regional announcer to anyone too young to remember when the Blue Jays won a World Series. So even though we can get any game and any announcing team on our phones or computers with At Bat, it’s not going to create the lasting memories for today’s young fans that these distinctive voices have for those of us in our 30s and older.

There’s not much else I can say about Harwell, but there’s a lot of great stuff that has been said:

When Ernie met The Babe, also from NPR

A fond farewell from Larry at Wezen-Ball

Farewell, Ernie. You and Jack Buck will make quite the team up there.

« My year on the disabled list
Photo flashback: Present and future Phillies »