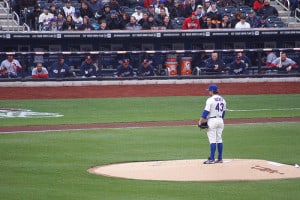 This one had a different feel to it.

At previous Mets openers (I know it wasn’t Opening Day, Opening Day, but it’s still the return of Mets baseball to its home ballpark, so I like to refer to it as Opening Day) in recent years, there’s been that sense of optimism and excitement, anticipation of a promising season to come. Even last year, when there were more doubts than this year (more on that in a moment), I think I had a more positive feeling overall.

But last week, for the first time in several years, I just didn’t feel that same sense of positive energy about the season to come. Last Friday, the feeling was more of hope — desperate hope, not anticipatory hope. More, Oh please don’t let this team finish in last place, and less, Let’s shoot for the division and see if we can’t fall back into the wild card.

But this year’s Mets team, I think, is more of a mystery than last year’s (hence the greater sense of doubt in 2010 than in 2011). Going into 2010, the thinking (here, at least), was that 2009 was so sabatoged by injuries that if the stars could just stay healthy and if David Wright could get comfortable in Citi Field, the team had to be good for at least 85-88 wins, which would put it in contention in September. But the doubts were still there that they could be healthy (and it didn’t help that Jose Reyes and Carlos Beltran started the season on the disabled list, that Jennry Mejia was in the bullpen when everyone felt he should be in the minors developing as a starte and that Mike Jacobs and Gary Matthews Jr. were on the team, period).

In 2011, though, I sense more of a feeling of curiosity. Nevermind the roster, the changes in the front office, the manager’s office and the owners’ bank accounts have us wondering more about what the future holds than what the past has brought. Sure, there were very few changes in on-field personnel besides the long-desired shedding of two particular contracts, and that should give us very little hope, but I think the installation of a new philosophy brought on by Sandy Alderson and Terry Collins has us wondering — perhaps expecting — this team to overachieve a little after so many recent years of underachievement. Instead of the “ifs” centering on the negative like last year — “if Wright can’t hit at home… “if Beltran’s knee can’t hold up …” — it seems to be more of a positive spin — “if Dickey can repeat his breakout year …” “if Beltran’s knees can hold up …” And maybe some of that comes from the fact that everyone seems to be picking the Mets last in the NL East, or at least no better than fourth. (Personally, I couldn’t see them finishing last … until this past weekend. But even that is just one series, one that showed a bullpen with some holes and perhaps one that wasn’t yet in sync, and changes have already been made.)

Anyway, you can’t predict a season based on 10 games, or even four (remember how good things looked after game four?), or even two weeks’ worth. If the Mets are well back in last place come May 1, then I’ll be severely disappointed, but until then, I’m just going to have to look at it as this group getting its footing. It’s all I can do. I can’t be one of those cranky, bitching, complaining, booing Mets fans. There’s no enjoyment in that for me. I like to be happy, and sometimes it seems like those fans just can’t be.