As you may recall from the post just below this one, I specifically said the Orioles should trade Jerry Hairston and prospects for Sammy Sosa. I had no idea the Cubs would settle for two minor leaguers in second baseman Mike Fontenont and right-hander David Crouthers who are ranked merely No. 7 and No. 10, respectively, in Baltimore’s top 10 by Baseball America. Plus, when you look at how little the Orioles actually have to pay Sammy (whether they decide to sign him to a ridiculous extension is their own fault), it was too good a chance to pass up. They’ll need him to hit 66 home runs again to overcome their questionable pitching, but you never know.

* * *
According to Bob Nightengale at USA Today, the Pirates’ Craig Wilson has ditched his mullet for a crew cut. We mourn you, Thor, god of thunder. 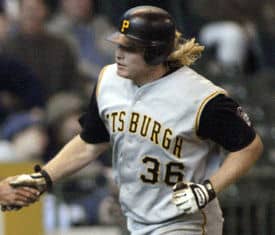 The flowing mane is no more …

* * *
The Dodgers signed Japanese third baseman Norihiro Nakamura, who signed with the Mets in December 2002 but then decided he wanted to stay in Japan. He claimed the reason he bailed was because he went online to the Mets website and saw a report that he was coming to New York. The team and Nakamura apparently had made a deal to announce the signing in Japan, and Nakamura mistook the Mets’ site at MLB.com as an official team site run out of Flushing. What he was actually reading, however, was a news story — all of which boast the tagline, “This story was not subject to the approval of Major League Baseball or its clubs.”

“I checked the Major League Baseball web site and there I was on the Mets’ web site,” Nakamura said at a press conference in Osaka back then. “We asked the New York Mets, please don’t issue the news from New York. They broke our agreement. In Japan, the process is very important. We arrive at the new year with the Mets. We have to inform the club, ‘We’re going to sign with the Mets,’ but then they broke the agreement. But I can’t sign with a team that broke a promise.”

It was probably good for the Mets, who might not have brought up David Wright last season if they were paying Nakamura $3.5 million (his deal was two years, $7 million). At least it appears they had Wright in mind when they made the offer to Nakamura.

* * *
If there’s one good thing about the Super Bowl being played in February these past few years, it’s that come Monday morning, when most of us are struggling into work after a — ahem — heavy night, we will be a mere 14 days away from pitchers and catchers reporting to sites across Florida and central Arizona.

The two weeks between the conference championship games and Sunday’s Super Bowl have sapped my enthusiasm and momentum, so I offer only this half-hearted prediction: No one thought the Patriots had a chance against the Rams three years ago, so I’m going against the grain here. While it would be nice for Notre Dame head coach Charlie Weis to pick up his third ring in four years, I’m picking the Iggles (+7), 29-20.