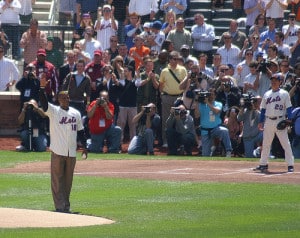 A sunny, warm mid-70-degree day. Is this really Opening Day?

Indeed it was, yet we kept pinching ourselves and discussing whether it really was as good as it seemed. My mom and my pal Dave arrived separately from Casey and me, but we all met up in Danny Meyerland in center field before the game, munching on garlic parmesean fries and washing them down with Brooklyn Summer Ale, new to Box Frites this year. 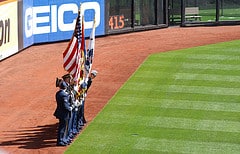 After our appetizer, we made our way to our seats in the first row of section 137 in left-center field. I decided to splurge a little for the opener, choosing seats in a new vantage point and in a location where we’d be comfortable. Mom commented several times throughout the day how nice it was, especially the legroom as she stretched out and propped her feet on the screen in front of us. Looking over the wall before the game, we found ourselves situated between the banners for the 1986 World Series champions and the 1988 NL East champs, directly above the 384 mark. When Jason Bay hit his triple, I stood up and leaned out a little to watch Chris Coghlan pick up the ball on the warning track and fire it in, too late to third base. 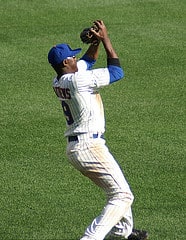 Sitting in left-center made for some good scouting. Gary Matthews Jr. surprised many out there, and to me he looked like he had a good read on fly balls, taking charge in calling off Bay and Jeff Francoeur at times and going back and coming in with ease. Yes, he looked shaky on some, but that seemed to be more from the effects of the wind on the baseball than Matthews’ ability. I certainly hope we don’t have to critique Matthews’ and Angel Pagan’s play in center for too long, but at least they each got off on the right foot. 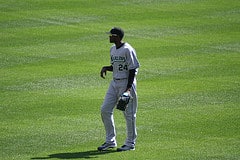 The same could not be said for the Marlins’ Cameron Maybin, who flailed at the plate (as many do against Johan) and had an adventurous day in center field. A couple of bloop hits fell in front of Maybin, out of the reach of any infielders or Coghlan, but that isn’t necessarily Maybin’s fault. It is a vast outfield, and who knows how the Florida coaches had Maybin positioned. But on Rod Barajas’ double in the four-run sixth, it seemed that Maybin was overmatched and out of position from the moment Barajas swung.

It was very easy to get caught up in David Wright’s home run and Johan Santana’s solid six innings. We didn’t care that it’s just Opening Day or that Johan can’t pitch every game. It’s the start of a new season; Spring Training is over and we’ll worry about Game 2 on Wednesday. In fact, as Marty Noble’s game story in that last link pointed out, the Mets did a lot of things right to start off 2010 that were problems in 2009 — they brought home runners in scoring position (4-for-10, plus a sacrifice fly), tacked on runs (extending a 2-1 lead to the eventual 7-1 final) and put up a big inning (a four-run sixth immediately after Florida had cut the margin to 2-1). 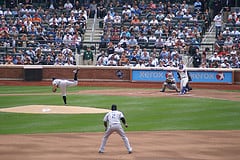 Wright’s homer was a particularly good sign after all the talk in the offseason about his power outage last year and the discussions in Spring Training about his enhanced physique. I truly believe he’ll hit 20-25 out this year for a variety of reasons, not least among them the fact that Bay provides some protection in the lineup and once Jose Reyes and Carlos Beltran return, Wright will hopefully bat with some threats on the bases more often than he did in ’09. And after having the foresight to record Wright’s home run in last year’s home opener, was pleased to snap a photo when he hit his first this year. It wasn’t until later that I realized that it was the first long ball of Wright’s career that did not count for at least one of my fantasy teams. After some fortunate draft positions in the long-running keeper league (three players per team, with no one player allowed to be kept for more than three years in a row) Dave and I are in, this year I couldn’t keep Wright and didn’t have a chance to draft him before Dave did. But at least another Mets fan benefitted.

On Opening Day more than other days, I find that I want to see as much of the game as I can and am not as interested in walking around for other vantage points. I crossed Shea Bridge a couple of times and we entered through the rotunda, passing the Home Run Apple’s new home out front. And after leaving through one of the exits on the first-base side, we saw Jerry Seinfeld and family (plus Tom Poppa, the host of the Seinfeld-produced The Marriage Ref) walking to their car in the ultra-VIP parking lot. They were in a small group and stopped at the edge of the lot, which would’ve been an easy opportunity to politely ask to take a photograph, but we chose not to bother him with his kids in tow.

So we didn’t see the new Mets Hall of Fame (other than in passing as we walked up the stairs in the rotunda) or make our way down to McFadden’s in center field. But we’re already going back on Friday; I went to Stubhub and bought some slightly reduced Promenade Club tickets for the game against the Nationals and I hope to get there early to visit the museum and get a good spot in the Acela Club. We’d like to try fine dining at the ballpark just once, and I figured a cool, possibly rainy night against the Nats in April isn’t a bad choice. I could’ve bought first-row Pepsi Porch tickets instead (another Citi Field goal for me), but with the possibility of rain, I figured sheltered was better — even if Adam Dunn is in town.

Here are the rest of the photos of Opening Day, a truly beautiful and gorgeous day at Citi Field.