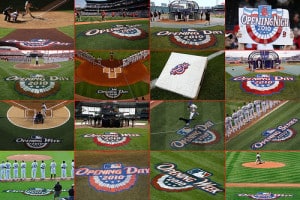 I decided to go with a little more than just the logos this year, as opposed to last year.

The count on the fields this year includes seven Opening Day logos (Arizona, Boston, Cincinnati, Houston, Kansas City, New York and Tampa Bay, three Opening Series logos (Atlanta, Oakland and Pittsburgh) and three Opening Week logos (Anaheim, Milwaukee and Washington). Ironically, Boston, which had the one true Opening Night game, went with Opening Day on the field, but one fan drew up Opening Night for her sign. All the bases, I believe, had Opening Day on them.

Comparing 2009 and ’10, all teams that started at home both years went with the same logo, except for Texas. The Rangers chose Opening Week this year after using Opening Day in ’09. And for some reason, the White Sox did not have an Opening Day/Week/Series logo on its field at all on Monday.

« How I saw Opening Day
Ready to open up the farm »