As a guy who once thought being an investigative journalist or baseball beat reporter was his ultimate dream job, I kept a lot of newspapers. I thought about the historical value they might have and dreamed of some large game room or memorabilia display in the sprawling house I would have based on my book profits as a well-known author (in addition to my reporting duties, of course).

After Mark McGwire broke Roger Maris‘ single-season home run record, I asked my friends around the country to send me a copy of their local newspapers from the next day. One college friend — also a newspaper and baseball buff — happened to have been visiting his girlfriend in law school in St. Louis at the time and sent me the next day’s (if not the EXTRA! edition distributed at the ballpark after the game) Post-Dispatch. I then did the same thing with friends in Knoxville and Austin the morning after the Bush-Gore election, which of course wasn’t decided until a month later.
I still have some of the papers from those and other events, though I sorted through them a few months ago and recycled quite a few. At this point, do I really need to see how the Los Angeles Times covered McGwire’s feat, especially now that it has lost so much of its luster? But I still have papers commemorating the Mets’ 2001 NLCS clincher (which I attended), their World Series Game 3 win over the Yankees, the deaths of Joe DiMaggio and Harry Caray, the Nationals’ first game in Washington (which I also went to), the first day-night doubleheader played in both New York ballparks, Tom Seaver‘s Hall of Fame induction and some significant moments in Lakewood BlueClaws history (as much because I wrote a lot of it).
There is also an assortment of non-baseball and non-sports events: Notre Dame football in Hawaii and the Fiesta Bowl, the women’s basketball national championship, the Space Shuttle Columbia disaster and the Devils’ second Stanley Cup. Most of the papers are The New York Times and Asbury Park Press, but there are a few issues of the Chicago Tribune, New York Daily News, Orlando Sentinel, Arizona Republic, Washington Post and maybe even a New York Post. 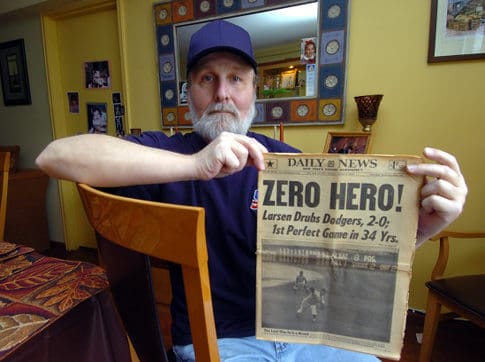 Of course, the oldest of these events is the 1992 Seaver induction. Somewhere (I might not have come across it yet, or I might have ditched it because of the condition it was in), I think I have at least one of the New York tabloids from the 1986 postseason — I believe it was Lenny Dykstra‘s Game 3 walk-off home run. I’m just not old enough to have anything as cool as the Daily News covering Don Larsen‘s perfect game. Who knows how many copies of that paper were burned up, used to wrap up fish for trucking uptown or dishes for a move, or used to cover someone’s head during an unexpected downpour. But Gary Sangastiano saved his copy and soon will loan it to Montclair’s Yogi Berra Museum to be put on display (Yogi, of course, caught Larsen that day).
I’ll make a point to drive up Valley Road to see it, but I also hope they scan or photograph the inside pages, too. As a news nut, I’ll be as interested in reading the coverage as I will be in seeing the cover in all its yellowed glory.
« Just whose Bears are these, anyway?
Shouldn’t the original be good enough? »