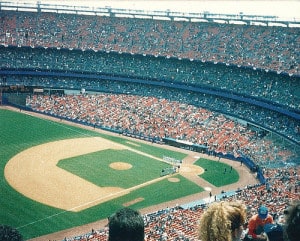 I missed Friday and was never married to the “Photo Friday” moniker anyway, so I’m going with “Photo Flashback” for this one.

While thumbing through an old photo album the other day, I came across several shots from various trips to Shea Stadium and Cooperstown. They were all taken with my meager Kodak Disk camera, so they images aren’t great. The players look like specs on the film, so you’ll pretty much have to take my word that they are indeed from April 1989.

It was a Sunday, the final day of the exhibition season. The Mets and Yankees had agreed to resume playing Spring Training games against one other in ’89, culminating with two in New York during the final weekend. On Saturday, April 1, 1989, they played in the Bronx. On Sunday the 2nd, they were at Shea. And so was I, along with my father, his brother and my cousin, the only Yankee fan in the bunch.

The Yankees won, 4-0, their fourth win in six exhibition games against the Mets. But it was the Amazin’s who would have the better season, finishing 87-75, though six games behind the NL East-winning Cubs. The Yankees went 74-87, trailing the champion Blue Jays by 14 1/2.

What follows are the photos I found worthy of scanning from that day (you can see them individually on my Flickr account). In the second one, you may notice two hands in the air, reaching just above the foul line in the center of the photo. That’s Mayor Ed Koch, who was on hand for the game. Oh, and those pregame shots with players in the infield? Not batting practice — infield practice. When’s the last time you saw that at a big-league ballpark?

« How’s this for a cover jinx?
When the Sox and Yanks meet to start the season »