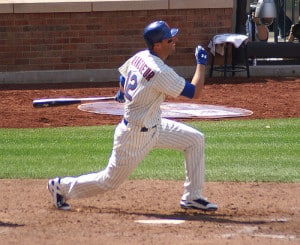 A busy weekend has made this look back at Saturday’s win over the Braves a little outdated by now, but it’s still fun to look back on the middle of a sweep sandwich involving one of the Mets’ biggest division rivals — especially when one Larry Wayne Jones Jr. played such a big part in two of the losses.

We had a friend visiting from California for the weekend and four free tickets from my wife’s dad, so we invited a fourth who was also making her Citi Field debut (more for Shake Shack and the company than the baseball, but I always enjoy explaining the game to others) and were treated to a gorgeous day and dozens of pooches for Bark in the Park. I couldn’t help but think of the fans’ criticisms of all the nods to the Dodgers while bringing Lauren, a UCLA grad like Jackie and Dodgers fan, in through the rotunda and snapping her picture in front of the big No. 42. To top it off, Steve Garvey — who works with the Bark in the Park sponsor, Natural Balance Pet Foods — threw out the first pitch.

This team sure isn’t perfect and this run of six wins in seven games — coinciding with Ike Davis’ arrival — could be little more than the yang to the yin of the first two weeks to put this team one game over .500, but it is nice to be one game on the good side than one on the bad. Another series win against L.A. would be a nice springboard into a weekend in Philadelphia and a Sunday night series finale with Roy Halladay on the hill.

And, hey, look at this: Monday’s rainout, which pushed Oliver Perez back to the second game of today’s doubleheader, means that both Ollie and Johan Santana will have four days of rest between now and Sunday. So it’s Jerry Manuel’s choice of who goes up against Halladay and the Phillies on Sunday night on ESPN. Had Ollie pitched on Monday, it would’ve been his turn in the rotation and Johan would’ve been left to open the series in Cincinnati on May 3. Hmm, which would you choose for Sunday night? [2:51 p.m. update: YES!]