So it sounds like Fernando Tatis is coming back. Fine. Some right-handed power. A versatile player who can fill in at first base, second, third and the corner outfield spots when needed. A double-play machine. We know what we’re getting. 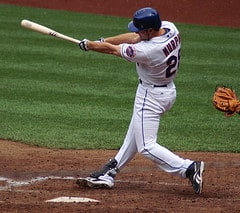 I just hope it’s not a platoon. Like Matt over at MetsBlog, I’d rather see what Daniel Murphy can do against left-handers. What do the Mets have to lose? This is a third-place team, at best, and it’s going to take a 100-percent healthy team (from May onward) and some injuries to the Phillies (and probably Braves and/or Marlins) for the Mets to be in it after the All-Star break.
Murphy’s still just 25 (on April 1) and though his similar players through 24 aren’t impressive, there’s one eye-raising name on the list: the Blue Jays’ Adam Lind, who broke out last season … at 25 (though it was his third year of at least 80 games). Of course, Murphy won’t hit 35 home runs — and I’m not as sure about 20 as Howard Johnson is — but I could definitely see a .290, 15-homer, 80-RBI season out of him, much like Keith Hernandez‘s 1987. Murphy was a career .290 hitter in the minors, with just 22 more strikeouts than walks over 1,078 plate appearances, and I think that plate discipline will translate in the Majors.
I looked at Murphy’s monthly splits in 2009, and his OPS vs. left-handers (though in admittedly small sample sizes) was higher than his overall OPS in April, May and September/October and lower in June, July and August (the month in which he had the most plate appearances vs. lefties):
No, the numbers aren’t great, particularly from a first baseman, but the guy was still only 24. I won’t compare them in a chart — because in addition to different eras, ballparks, etc., I of course am not saying Murphy will become Hernandez — but look at their year 24 seasons on Baseball-Reference. Eerily similar.
With the way the team is set up now, looking so much similar to last season’s, I don’t think the Mets should be playing the matchups when it means taking valuable developmental at-bats away from players like Murphy for players like Tatis. It’s tough, at this point, to be saying the Mets won’t be contending, but I don’t see it. I’m not writing off the season just yet, because Opening Day is still two months away, but I am preparing myself for non-meaningful games in September.
I’ll still be out there in Queens rooting for the team, because as I commented over on Amazin’ Avenue, I can’t root against the team just so that a horrible 2010 brings about significant changes for 2011. For one thing, if the problem really does begin with the owners’ philosophy (and I think it does), a new medical staff, a true re-dedication to building the farm system (two things I wished they’d done this offseason) and replacing Omar Minaya and Jerry Manuel aren’t necessarily going to put a vastly different product on the field in 2011.
Man, this new dedication to blogging has really brought out the pessimist in me when it comes to the Mets. I need to work on that.
« Revisionist history: Darryl and Dawson on the Mets
Photo Friday: Padres vs. Phillies, 1994 »