So now it looks like Derek Jeter‘s return to the Yankees lineup may be delayed, which would further delay his march to 3,000 hits and reduce the likelihood that he records the milestone hit against the Mets at Citi Field during their July 1-3 Interleague series.

And I think that’s a shame. 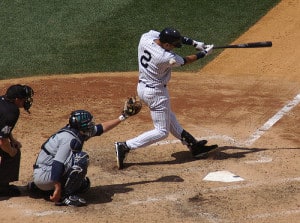 No, really. I think it would have been a good thing to have happen not just at the Mets’ home ballpark, but in New York in general. Not only has no Yankee ever reached the 3,000-hit threshold, but none of the 27 players who have already gotten there collected the milestone in New York.

If Jeter is able to be activated from the disabled list on Wednesday, the first day he’s eligible to return, he’d have two games at home and three at Citi Field to collect the six hits he needs. Any delay in his activation obviously affects the timetable, increasing the chances that the lasting images of No. 3,000 will feature Jeter in the road grays and a respectful but half-hearted ovation from the home crowd. After Citi Field, the Yankees play three in Cleveland before finishing out the first half at home against the Rays. If he doesn’t get it before the All-Star break, the Yankees open the second half with eight on the road — four each at Toronto and Tampa Bay. Granted, Tropicana Field is a home away from home for the Yankees, but do we really want to be left with images of a base hit on bright green synthetic turf and a shadowy, artifically lit photo of Jeter doffing his helmet under a closed roof?

Getting the hit at Citi Field might be good for the Mets — and their fans — as well. Imagine Fred Wilpon watching that ovation from all the Yankee fans in the house, perhaps supported by a respectful cheer from the Mets partisans as well. Then, Wilpon might look over at Jose Reyes at shortstop or imagine David Wright healthy and standing at third base. If Jeter’s getting such a rousing ovation for getting his 3,000th hit in the home of the Mets, imagine what the roar of the crowd would be if Reyes or Wright did the same sometime around 2022. Maybe Carl Crawford isn’t worth Reyes money. 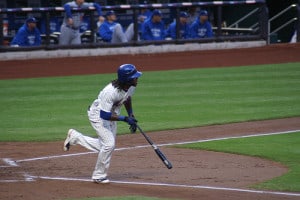 Entering this year, Reyes averaged 140 hits per season — which takes into account his injury history — which would mean he’d eclipse 3,000 sometime during his 22nd year in the big leagues. That’s certainly a stretch, considering how important his speed is to his game and the demanding position he plays. But considering the tear he is on this season — on pace for 231 hits entering tonight’s game in Texas — and his reduced strikeout rate, perhaps he’s finally put it all together and, barring injuries, could average significantly more than 140 per year through the rest of his prime. Should he finish 2011 with 231 hits, he’d be at 1,350 and his yearly average would be 150 per season. At that rate, he’d get to 3,000 right at the end of his 20th year. Having just passed his 28th birthday this month, Reyes would be 39 at the end of his 20th season in the Majors. (Looking at Reyes’ healthiest and most productive peak thus far, the four seasons from 2005-08, he averaged 159 games and 194 hits per year, so when he’s not on the DL, he’s much closer to a 190/200-hit-per-year pace than 140/150.)

While it’s certainly unlikely, it’s not unprecedented for a player known more for speed than power — since World War II — to last long enough in the game to get there. Lou Brock did it at 40 in his 19th and final season (he averaged 187 per year). And contact hitters Tony Gwynn, Wade Boggs, Pete Rose and Rod Carew all got there without being long-ball or stolen-base threats. Roberto Clemente could fit into that group as well; he never hit 30 home runs in a season and finished with 240, fewer than Robin Yount or Craig Biggio (and more than Rose, Brock, Gwynn, Boggs, Carew and several early-century guys). And Reyes’ .290 career batting average bests Rafael Palmeiro (.288), Eddie Murray (.287), Carl Yastrzemski (.285), Yount (.285), Dave Winfield (.283), Biggio (.281), Rickey Henderson (.279) and Cal Ripken (.276).

Obviously, Reyes will have to make some tweaks and adapt his game as he gets older, but if this year is any indication, perhaps he can become continue his improvements and remain a solid contact hitter and on-base threat. And maybe a switch to first or second base or the outfield down the line will allow him to play long enough to get to 3,000 hits. I’m not saying it’s probable, but I don’t think it’s outside the realm of possibility.