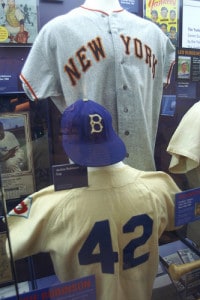 Half a century ago, the Dodgers and Giants returned to New York for the first time as visitors. They came during the last days of May and the beginning of June to face the team that had replaced them in the National League — and had replaced the Giants at the Polo Grounds — the Mets, who would turn out to be not-so-amazin’ that year.

Fifty years ago today, the Dodgers returned to New York from a game in Washington the night before, shuffling off to bed at 10:30 in the morning. But they didn’t scatter to their homes in Brooklyn. Instead, they laid their heads in a hotel in Manhattan, visitors not just at the Polo Grounds, but in the metropolis they once called home.

On May 29, 1962, the Dodgers came back to New York for the first time since leaving for Los Angeles. They arrived following a Memorial Day exhibition game in Spokane, Wash. — hence the midmorning arrival — and had a day off to recover from the travel before facing the Mets at the Polo Grounds on May 30.

“Exhaustion will have evaporated by this afternoon, however,” Arthur Daley wrote in The New York Times on the 30th:

That’s when these one-time idols of the fanatics from Canarsie to Greenpoint will perform at the Polo Grounds for the first time in almost five years — and as strangers. No longer are they the beloved Brooklyn Dodgers. They are the Los Angeles Dodgers who spurned love for gold and ran off with the fast-talking Walter O’Malley. But do Brooklynites still carry the torch? We’ll find out today when the Dodgers meet the Mets in a double-header.

The Mets had returned home from a long journey of their own, a 12-game trip from Milwaukee to Houston to Los Angeles to San Francisco. They lost the first to the Braves, won the next three, and then didn’t win again. In fact, the trip out West and the visit from the Dodgers — and then the Giants, who would follow their California neighbors as visitors to the Polo Grounds — would be part of the Mets’ season-long 17-game losing streak that saw them go from seven games under .500 (12-19) on May 20 to 24 games under (12-36) on June 6.

Before the Dodgers arrived, the Mets had played 15 home dates (with two doubleheaders, so 17 games total) to that point at the Giants’ former home and had averaged merely 9,167 fans per game, drawing a high of 19,925 on Sunday, April 29, for a doubleheader vs. the Phillies and topping 10,000 only six other times. But the imminent homecoming would change that: Each of the five dates (the Dodgers and Giants each played a doubleheader) would draw at least 22,000.

“The appearances of the Dodgers and Giants, unseen here since forsaking Brooklyn and New York for Los Angeles and San Francisco after the 1957 season, caused National League fans to scurry out of their hiding places in droves,” Joseph M. Sheehan wrote in The Times on May 30, 1962. “The advance ticket sale points to a crowd of at least 50,000 today. With good weather, as many as 200,000 fans may follow the all-but-forgotten course to the Polo Grounds over the five-day period.”

In their previous 15 home dates, the Mets had drawn a total of 155,879. “The games will present an opportunity to gain acceptance,” Sheehan wrote. Maybe it was the weather or maybe they did gain a little acceptance, because after the Dodgers and Giants left town, the Mets averaged 10,224 over their final 42 home dates (they played a lot of doubleheaders in ’62). The Wednesday total against the Dodgers was the largest in the Majors to that point, according to The Sporting News.

Sheehan also listed the 10 players who would be returning who had once played when the Dodgers and Giants were in New York. The seven Dodgers were: Sandy Koufax and Johnny Podres, the starters for the series-opening doubleheader; Don Drysdale; Ed Roebuck; Duke Snider; Jim Gilliam; and John Roseboro. Snider, though, was not expected to play because of a “jammed wrist.” The Giants brought back Mike McCormick and Stu Miller. “One whom everyone will welcome back is wonderful Willie Mays,” Sheehan wrote.

Over the next five days, the long-dormant fans would have a chance to come back to the Polo Grounds to root for — though more likely against — the teams, and a few players, they’d once called their own.