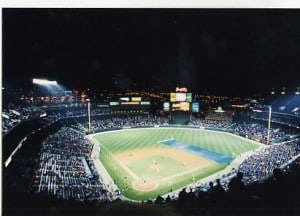 From the top in Atlanta.

Keep in mind that this was written five years before the Braves had to offer free tickets for Game 2 of the NLDS to anyone who bought tickets to Game 1.

Atlanta does not deserve the Braves.

The people down there are not worthy of the so-called “Team of the ’90s,” which has won eight divisional titles but just one World Series.

It’s not as much of a baseball town as it might seem. They mask it well, those Atlantans, with their tomahawk chopping and Jane and Ted in their box seat beside the Braves dugout. They try to make you believe they cherish Braves history. Hank Aaron Drive lies nearby, and the spot where Aaron’s record-setting 715th career home run landed is marked on a wall that designates the outline of former Atlanta-Fulton County Stadium. But if they really cared, the new stadium would be named for him.

True baseball fans notice the differences, most of which are subtle.

Watching the Braves in Atlanta is a painful experience for a Mets fan, and I had my teeth clenched and my lip curled throughout Game 1 of the National League Championship Series Tuesday.

I loathe the Tomahawk Chop, a demeaning ritual stolen from Florida State football fans. I despise John Rocker and his fist-pumping, vein-popping outbursts as he leaves the field. I can’t stand Chipper Jones and his arrogance, as good as he is.

Despite all that, I hit the road for Georgia early Tuesday, making the 26-hour round trip in a span of 46-hours. On the way, I picked up Matt Loughran, a college buddy now living in Bethesda, Md. We spent most of our time either on or within 100 yards of I-85, and nine of our 17 hours in Atlanta were spent sleeping.

But I saw enough of what Atlanta Braves baseball is all about in that short time. My observations are obviously sweeping generalizations, but do reflect the atmosphere down there.

To begin, the Braves haven’t sold out a game yet this postseason. Entire sections were empty Tuesday night, as they had been for the first-round series against Houston. Part of the reason I went to Atlanta to see the Mets in the playoffs was because I knew I’d have a tough time trying to get tickets for any of the games at Shea Stadium. Of the eight teams in the postseason this year, the Braves had the best record, and probably the most tickets available.

For most people, a night at a Braves game seems to be a social event more than anything else. They head out to the game so they can go to work the next day, free foam tomahawk in hand, and say they were there.

Between innings, the huge video screen shows nothing but fans in the crowd, some of whom do take the time to make signs. A few referred to a Subway Series, saying it would derail in Atlanta, or this was the end of the line. One woman, though, caught the camera’s attention with a Braves message on one side, then turned it over to reveal, Eat Slop Piazza, N.Y.” The first letter of each line was written in red to highlight “ESPN.” Apparently she didn’t check her TV listings: The game was on NBC.

Those red tomahawks you see on television are distributed to anyone walking in the gates – even those wearing Mets jerseys. As Matt and I worked our way through the stadium, a high school-aged girl exclaimed to her friends as we passed, “Hey, that Mets fan had a tomahawk!”

When the annoying chant music blares through the stadium, the Braves fans rise, waving their tomahawks (never in unison) and moaning. The few times they tried to start the chop themselves, there was nowhere near enough support. And as soon as the music stops, so does the chop.

In the fifth inning of Game 1, Gerald Williams’ double brought Walt Weiss around for a 2-1 Braves lead. The fans were on their feet, cheering and chopping … until Bret Boone lined out to right field – that was Roger Cedeno’s brilliant Ron Swoboda-like diving play – for the second out of the inning. Two outs, a runner on second and an intentional walk to Chipper turned out to be a cheer-killer in Atlanta. Without the organ telling them what to do, the fans took their seats again as Pat Mahomes came into the game and retired Brian Jordan on a fly ball to center.

Mets fans made a good showing in Atlanta. Two guys sitting in front of us made the drive up from Florida for Games 1 and 2, and another originally from Brooklyn drove in from Alabama, where he is stationed in the Army. One section away from our seats, several fans began cheers of “Let’s go Mets!” at times during the game.

There is something to be said for southern hospitality, though. After Matt and I spent much of the game chatting with two Braves fans next to us, they offered to let us stay at their place that night.

But that would have been too much Braves for one night.