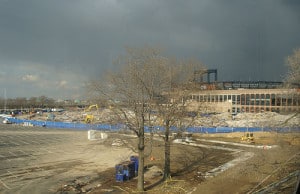 [NOTE: Updated, as you can see, with some of the pictures I took. I also embedded a great home video from 1982 Opening Day found on YouTube.]

After having lunch with two dear friends this afternoon, I had four hours to kill before work at 6 p.m., so with my camera bag slung over my shoulder, I rode the 7 out to Willets Point in Queens. The stop is still labeled “Willets Point-Shea Stadium,” but that moniker is true in name only. As of yesterday, Shea Stadium no longer stands.

It’s now just a pile of steel and rubble, not even the entire remnants of the old ballpark. Taken down in stages, it was likewise hauled away over the winter weeks so that what was left today is only a fraction of what has come down since September. (I’ll add some of my pictures tomorrow; I’m just too drained to muster up the desire to deal with them tonight.)

You first notice the change leaving the Junction Blvd. station. Where you used to see the hulking blue edifice of Shea peeking over the rooftops along Roosevelt Ave., you now get a glimpse of Citi Field’s light towers and the name of the ballpark emblazoned atop the scoreboard. It’s a drastic change that fits more with the neighborhood — the black steel of the light supports replacing the bright blue of the former stadium’s walls — yet still leaves a feeling of something missing. Then as the train approaches the Willets Point stop, you take note of the freshly paved parking lot, one that was already there but appears to have been resurfaced and re-lined, with new guard booths at the entrance.

But then the new lot leads to a construction fence, beyond which lie the piles of debris and a few small hills of crumbled concrete. Citi Field rises behind it all, even more beautiful now as you get a full look at the brickwork and archways that define the ballpark’s architecture. Upon arriving at the station, I first walked east along Roosevelt Ave. on the sidewalk outside the fence that runs along Citi Field. The parking lot was full, a bright red Pepsi-Cola sign rests high above right field and the video screen was in action. 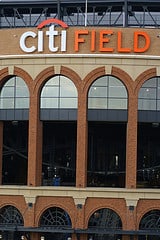 Construction workers continued to make progress both inside and outside the ballpark. Inside the Jackie Robinson Rotunda, I could see men on a crane working in the rafters, while crews outside laid sections of concrete for the walkway from the subway exit to the Rotunda’s main entrance. A circular section midway between the station and the ballpark looks like an area set aside for either a fountain or landscaping, and the wide sidewalk covers the entire gap, ensuring that Citi Field’s parking lots along the first- and third-base sides remain separated by a pedestrian thoroughfare. It’ll be a nice break, aesthetically, preventing the ballpark from feeling surrounded by parking lots, as Shea was.

I then walked back through the turnstiles and up to the subway platform on the Manhattan-bound side to overlook the former site of Shea Stadium. Four others stood there taking pictures, three of whom got on the next inbound train when it pulled into the station. Only I and an older man remained, cameras in hand, looking for a few new angles from our limited perch.

“We should’ve been here yesterday,” he said. “That’s when they brought down the last piece.”

Even had I known that the last section was coming down, I’m not sure I would’ve dragged myself out of bed that early on a gray, wintery-mix-filled day to watch a small section of ramps crumble. But this gentleman was a regular commuter on the 7 train and said he kept telling himself to take the time to come by with his camera, but didn’t act on in until it was too late. 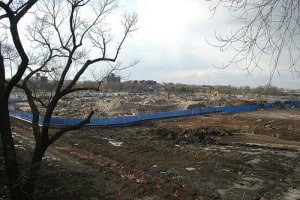 I’m only slightly sad to see the old structure go, and I’m sure that feeling of nostalgia or loss is tempered by the disappointing finishes the last three seasons. Had any of them ended with a World Series appearance, I might find saying goodbye a bit tougher to fathom. But it was a dump — it was our dump, of course, but a dump nonetheless. I went to enough games last season — 11 in 2008 and 81 dating back to 1985 — to get my fill, say my peace and give it a proper goodbye. I’ve had enough of crowded, dank corridors, of no standing room for a better view and of meals of peanuts brought from home to avoid paying way too much for horrible food.

I’m ready for the new era, the Citi Field era. I’m optimistic it will be a period of perennial winners, of pleasant summer evenings and sunny afternoons at a ballgame, of Mets wins and Phillies losses. Perhaps more than the better sightlines and the fresh, clean feeling of a new arena, I’m stoked for the new food options. Danny Meyer’s offerings alone could keep me satisfied during as many of the 15 games I attend from the ticket pack Dave and I bought, and I’m not sure I’ll even get near the Shake Shack on a busy summer Saturday afternoon.

When the next train bound for Manhattan pulled into the station, I got into the first car and sat by a window, looking over the last pieces of Shea Stadium as we pulled away. The next time I see that spot, it will be a paved grid of parking spaces, no doubt already scattered with cars on a Monday in April as the fans, the players and the new ballpark get ready for its true regular-season debut. The Padres will be in town and the Mets, I hope, will finish the night 1-0 at their new home.

« Picking at nits
Get out your pencils and notebooks »