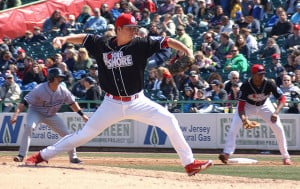 The Lakewood BlueClaws completed their opening-weekend series yesterday, but their record in the four games doesn’t matter. What matters is that they raised $15,000 for the BlueClaws Charities Restore the Shore initiative after auctioning off the special jerseys worn throughout the weekend. Each jersey featured the name of a Shore-area town on the back, making some shirts more attractive to bidders and leading to some high-priced last-minute bidding as the auction came to an end after the eighth inning on Sunday. The money raised — both from the auction and on related purchases in the team store — will go to fund grants that will go to Sandy victims who apply. And though the game-worn jersey auction ended yesterday, I’m told that there will be a few additional jerseys going up for auction online soon.

I wasn’t sure if I’d get in on the bidding, but after seeing my hometown, Little Silver, on the back of catcher Chad Carman during pregame warmups, two things stood out: First, he wasn’t huge, and second, he wore No. 18. The number actually didn’t matter much to me, though it helps that 18 isn’t an unattractive number (worn by Darryl Strawberry and any number of Japanese aces not named Yu Darvish). But Carman’s size (5-foot-10, 189 pounds) did. If my hometown had been on the back of 6’6″, 220-pound first baseman Art Charles, for example, there’s no chance I would have bid on that bedsheet.

After placing my initial bid — and only the third on the sheet overall — around the fifth inning, I went down to check on its status with one out in the bottom of the eighth. Someone had outbid me by the minimum $25, so I raised it another $25, but was willing to go only another $50 higher. Then I stepped back among the crowd of bidders to watch the game from the concourse. Another out; I was now one more from winning the jersey. Then a BlueClaws batter hit a fly ball into right-center, and I’d never wanted a ball hit by the home team to be caught more (at any game I’ve attended) than this one. But the diving right fielder came up short. We had to wait out another batter. 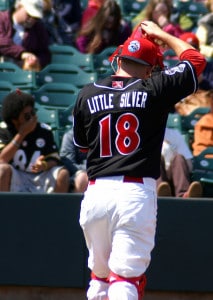 But then it happened: The next batter struck out and the BlueClaws staffers manning the tables quickly pulled up the tablecloths with the bid sheets taped to them and disappeared into the offices to sort through the bids. After the game, they collected the jerseys from the players and distributed them to the fans who returned to the concourse to pick them up.

Carman had the day off Sunday, so I didn’t get to see my jersey in action, except for the innings when he came out to warm up the pitcher while yesterday’s starter, Chace Numata, put on his equipment. But that was actually better, because when I picked up the jersey, it was clean and still smelled like laundry detergent.    In fact, the jersey’s final play in a game came on Saturday evening, when Carman fielded a throw from right fielder Brian Pointer and tagged out Kannapolis’ Kale Kiser as he attempted to score the tying run to preserve Lakewood’s 3-2 victory (its only win so far this season).

It had to have been interesting — and perhaps educational — for these players (only four of whom played in Lakewood last year) to join their new team but not wear the actual team name on their chests until the fifth game (which is tonight). I don’t know if Chad Carman bothered to ask where Little Silver is or if any players inquired about the amount of damage sustained to any of the towns, but I’m sure some thought about it.