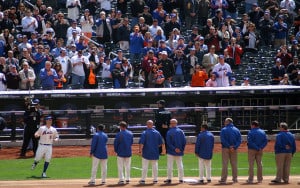 Well, we’re two days past Opening Day now, but I figured as long as I get this post up before the Mets play Game No. 2 tonight, I’m good. I just had some thoughts throughout the day — both Mets-related and MLB-wide — that I couldn’t shake …

I love Opening Day ceremonies. I slept in last year and arrived at my seat just as the Mets were running onto the field, and it just didn’t feel like Opening Day. So we made sure to catch a train an hour earlier from New Jersey and were walking into the Rotunda right around noon. I love seeing all the players lined up along the baselines, the new guys getting their first exposure to the fans, last year’s mid-season callups (Hey, Matt Harvey!) getting the Opening Day treatment. The national anthem gets star treatment (Emmy Rossum!), there’s usually a huge flag stretched across the outfield (though nice touch this year with the NY heart and Hurricane Sandy support crews) and the first pitch is often a VIP (Rusty!!!). 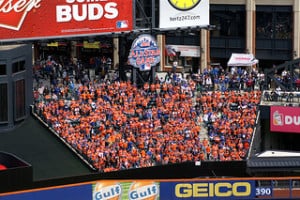 Opening Day crowds. They may struggle to break 15,000 tonight in Queens (heck, it’s supposed to be in the 20s — 10,000 might be pushing it), but on Opening Day, no matter what the prospects for the season are, the crowd is full and enthusiastic. There’s hope. Look at Houston — I’m not sure you’ll find 10 people outside the clubhouse who think the team can win 62 games, but those fans were jazzed on Sunday night. Sure, it helped to have the Rangers in town for the first American League game in Astros history, but that crowd was into it. I don’t care who your team is or what the expectations are, 1-0 feels a lot better than 0-1, especially if you’re in attendance.

Ballpark exploration. Each winter, teams take a look at what they offer their fans and ditch what didn’t sell and come up with new offerings and upgrades. Some even release the new additions to great fanfare. Though the Opening Day crowds often make it a tough slog, I do enjoy taking a lap around the concourse to see what’s new. Even if I don’t get in line that day, I make a note to come back during the next (less crowded) game. But on Monday, when we realized Mom had bought tickets in the last row of the upper deck and the wind was blowing through us, we descended to the food court behind home plate to try Pat LaFrieda’s steak sandwiches and Parmesan garlic fries and Oh. My. God. Shake Shack, you have competition. (And dammit, I saw Danny Meyer out in DannyMeyerLand before the game but didn’t realize it was him before he walked off, so I didn’t have a chance to thank him. Or more.)

I was happy to see the Padres line up in their road gray jerseys. I’m OK with alternate jerseys (used to be a fan, but now they’re such a gimmick, I’ve come down with my enthusiasm), but not on Opening Day. Opening Day — like the All-Star Game and World Series — is a showcase. Come out in your finest, your dress whites (or grays), your primary look. Leave the black/blue/red tops in the clubhouse for the next game. (I’m looking at you, Pirates, Marlins and Rockies.)

Small sample sizes. The numbers are so much fun to play with. David Wright is going to steal 324 bases! Collin Cowgill will drive in 648 runs!

Changing addresses/new stars/absent stars. Maybe this was just the beginning of something special for Jackie Bradley Jr. or A.J. Pollock. It’s also weird to see others in new uniforms. We got used to Kevin Youkilis in pinstripes, but not those pinstripes. And how strange (but nice, as a Mets fan), to see Chipper Jones throwing out a first pitch and not swinging at one?