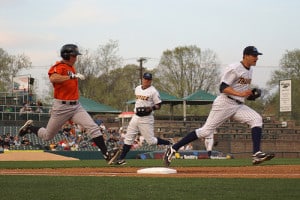 I’ve been to 11 Mets openers and four or five Lakewood BlueClaws openers, but last night was my first opening night at Trenton’s Waterfront Park. And while it may have only been April 8, with a gametime temperature of 75 degrees, it felt like July 8. A gorgeous night all around — with the exception of Christian Garcia’s injury.

It seemed like as many fans were there to see the Yankees’ World Series trophy as for the game. The line on the concourse was longer than any concession line, Chickie & Pete’s included. The roar of the crowd was a little subdued at times for the first game of the season, but that’s not the fans’ fault — those in line reacted to those in the stands reacting to the play. Even the players and coaches wanted a closeup look.

I spent pregame on the field and the first inning in the photographers’ box at the end of the Thunder dugout. Catcher Austin Romine, the No. 2 prospect in the Yankees’ system, was the first player out of the clubhouse, stashing his gear at the end of the bench and getting himself loose for the game. He introduced himself to me and spent 15 minutes chatting with me and team photographer David Schofield. If first impressions hold, he’s a good kid — not many players go ahead an introduce themselves — with the right level of confidence and cockiness to make it to the Majors. And though the only player ahead of him on Baseball America‘s list of Yankees prospects is also a catcher, it may not be Jesus Montero’s career-long position, so Romine may be the heir apparent to Jorge Posada. Romine went 1-for-4 with an RBI and a run scored in his Double-A debut.

After back-to-back championships in 2007-08, the Thunder missed the playoffs last year, finishing three games under .500 and 13 1/2 out of first place. They started off on the right foot in 2010, though they may now have to replace their opening night starter. One way or another, there’s going to be plenty to follow in Trenton this season.

Created with Admarket’s flickrSLiDR.
« Ready to open up the farm
Diving into Mets history »