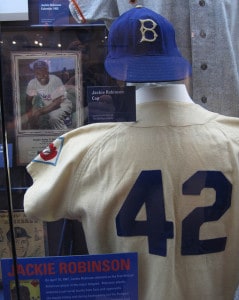 I’m no critic and I don’t aspire to be one. I don’t have a technical eye. I don’t go to movies looking for flaws, inconsistencies or mistakes. I’ve never walked out on a film because, if I’ve paid money to be there, I might as well get the full value from the pretty people and bright colors on the screen. So if you’re looking for a review of “42,” move along.

Simply as a fan — of baseball, of movies, of Jackie Robinson and the Brooklyn Dodgers (I realized years ago that there’s something about that team that would’ve drawn me to it — I loved it. I loved the costumes and the cars, the reproduced uniforms (even if they got the Brooklyn caps wrong), the computer-generated ballparks from Florida to Jersey City to Brooklyn and Pittsburgh. I thought it was wonderfully acted, even if Harrison Ford seemed like a caricature. Chadwick Boseman was stellar and Nicole Beharie devine. I can only imagine what Rachel Robinson thought seeing a part of her life dramatized on screen.

But what I think I loved most were the baseball scenes. (I don’t know who choreographed them or what former players, other than C.J. Nitkowski, may have suited up.) This may be the best, the most realistic baseball choreography I’ve ever seen on film. It’s heavy on game action, and maybe once — one swing — out of all those recreations did I think it looked awkward. The first time Boseman steps into the batter’s box as a Montreal Royal to face the Dodgers in a spring exhibition and the pitch comes in high and tight felt so real. It sounded just like when you’re playing catch and you lift your glove to catch a hard one at your ear — that sound of the air whooshing around the seams and then the smack of the ball into the glove: Fffffffffssss-THWACK!

Digital reproduction of real — and long-gone — places has advanced so much that scenes in the old ballparks looked more like they were filmed on location with a soft lens than with an actor in front of a green screen. Maybe it’s me, but I thought some of the scenes at Ebbets Field or Forbes Field make “Titanic” look like it was filmed in a bathtub. The ballparks looked familiar, like I’d remembered them from visits even though they were all gone more than a decade before I was born. But I love to look at (and sometimes collect) photos of these long-gone cathedrals, and I’ve “played” a few games at Ebbets and Forbes and the Polo Grounds on various versions of Xbox and PS3 baseball games. The movie brought the pictures to live and put the video games to shame, even if they gave Forbes Field a wooden (?) green outfield wall — not brick, and no ivy — and put the flagpole behind the center-field fence instead of on the field of play.

I thought — minor spoilers in this paragraph — that limiting the setting to 1945 through the end of the ’47 season provided the perfect window to squeeze Jackie’s story into a manageable 128 minutes. There is little politicalization — there’s no dialogue about what Jackie’s trailblazing will mean for society as a whole. Other than the voiceover intro and just a few off-field scenes of segregation and racism, nearly all of that discourse is presented in the context of a ballgame. We didn’t need to see anything before 1945, and ending the film with a key home run may have been hokey, but it worked for me. I’ll let that slide. And yes, I realize the Dodgers didn’t clinch the 1947 NL pennant in Pittsburgh and that the game that day didn’t play out as depicted, but I found that out only after coming home to look it up. I doubt anyone not alive that day to remember it didn’t realize the artistic license until they got home and delved into baseball-reference.com, either.

The epilogue — a few more spoilers — captivated me. In typical biopic fashion, we’re given updates on what happened to the real-life people after the timeframe of the film. The characters are shown one by one, with text on the screen listing their accomplishments. We see several actors, in scenes not shown earlier in the film, in action until the image freezes and the text appears. The splendid “Life Is A Ballgame” by Sister Wynona Carr plays, and after several actors in character have flashed by, up pops a black-and-white photo of Rachel and Jackie — the people, not the actors. Jackie’s accomplishments are displayed alongside photos of the man himself. It was actually a bit emotional and very well done. The slideshow then transitions into recent MLB footage of current players wearing No. 42, with text explaining how the number was retired throughout Major League Baseball and is worn by everyone on April 15 each year. And with that, events that happened nearly 70 years ago, to and by a man who died 40 years ago, are put into the context of today’s game.

Whatever its flaws, “42” did it for me — as a baseball movie, a biopic and a dramatization of historical events. There was even a moment in the film, when Branch Rickey tells Robinson that he saw a white boy in a sandlot pretending to be Jackie Robinson, that sounded a lot like what I wrote  in a short story for a college class in 1997. If I had ever tried to write a screenplay, this subject would’ve been one I wanted to write about and parts of this movie would’ve been how I wanted to write it. And that’s when I know I’ve loved a film.

« BlueClaws helping to restore the Shore
News, notes and rumblings around the minors »