11:29 p.m. update — The Daily Show interview was great, of course, and Jon Stewart’s New Jersey roots made it unique, when Stewart mentioned Mays’ days with the Trenton Giants in 1950. Back when the Trenton Thunder came along in 1994, the coverage of the city’s baseball history had featured that connection, but I’d completely forgotten it. Mays was the first black player in the Interstate League, which was noted on this baseball signed by Mays that year.

Willie Mays is making the rounds in New York this week — he’s even on The Daily Show tonight — to promote a new biography, the first that he has authorized. Last night’s sit-down with Bob Costas on “Studio 42” was a joy to watch for someone who wasn’t born until after Willie ended his career with the Mets in 1973.

My favorite Mays story has always been his afternoon stickball games on the streets of Harlem before he’d head up to the Polo Grounds for the game. In this day of SUVs with tinted windows and underground players’ parking lots, you’re not going to get that kind of interaction anymore. Though with blogs and Twitter and camera phones, who can blame the players?
Another thing that struck me during the two-hour program was that New Jersey’s own Larry Doby was the runner when Mays made the catch on Vic Wertz’s drive to center field in the 1954 World Series at the Polo Grounds. Mays said that he was more worried about making the throw to the infield — knowing that he had scored from second on fly balls to the ballpark’s vast center field — than making the catch, but Doby had already rounded third, so by the time the ball got back to the infield, Doby was just getting back to second. 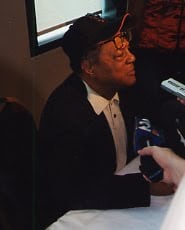 Two more segments of the interview are here and here, but they don’t include one moment from early in the show when Costas refers to Mays’ “classic Giants cap” on his head. It’s bothered me for several years now that Mays regularly wears the hideous batting practice cap at his public appearances. But he must like the feel of it, because he wore the Mets version at the closing ceremonies for Shea Stadium. But Costas’ reference to it as “classic” was grating. A cap with the SF logo would be nice to see, and a New York Giants replica lid would be truly classic.
I’ll update this post tonight with the Daily Show clip — if Willie’s able to get there in all this snow. And though I have dozens of unread books around the house, someday I may have to get the Harry Potter-sized bio that has prompted this look back at Willie’s career.
« Snow day
Somewhere between disaster and excellence »