It’s Friday night in Pittsburgh and PNC Park is the place to be.

“Standing room only,” says a fan at a ticket window, turning to his companions. They decide to take them, because they want to be a part of it.

A part of what? Well, nobody knows for sure, not just yet. But there is something developing here at the confluence of the Three Rivers. A rabid fanbase in the Steel City — one that has fervently celebrated two Super Bowl victories and a Stanley Cup title in the past five and a half years — is ready for some summertime sports success, and just being a few games above .500 for a team that hasn’t sniffed a winning record in nearly two decades is close enough.

The Pirates are becoming a hit in Pittsburgh, while the rest of the country marvels — at best — and scoffs, waiting for the inevitable slide that will send them back down below decks to the sub-.500 quarters they’ve inhabited ever since Sid Bream made like Cool Papa Bell and slid home ahead of the throw from a five-tool left fielder in his prime named Bonds. But this is an enjoyable group of Buccos, filled more with youth and potential than the gray hairs and experience that have dominated Pirates rosters in recent years. Previous groups donning the black and gold have fallen somewhere between an Oceanic airbus full of castaways and
merely enough to fill the S.S. Minnow; this collection of Pirates won’t be pushed around the NL Central.

Standing-room only in sports today is close enough to call it a sellout, so that’s what Friday night at PNC Park was. Baseball’s most beautiful ballpark was full, fuller than I’ve ever seen it in my five games there. Fans lined the spiral ramp in the left-field corner and stood along the concourse behind each section on the main level. Concession lines were long, though bathroom lines weren’t — either I picked the right times to go, or this town knows how to balance hydration and inebriation. 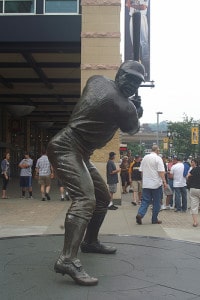 As usual, Federal St. to the east of the ballpark was closed as fans strolled across the Roberto Clemente Bridge from downtown. Duquesne Light, the company sponsoring the night’s Jose Tabata T-Shirt giveaway — had a big picnic area set up in the middle of the road as fans milled about and music filled the air. Sidewalk seating at the restaurants was packed. We dodged our way through the crowd to the nearby statues to gaze upon the largess of Willie Stargell‘s rear end and Clemente’s shiny fingers, the result of so many fans reaching up to hold his hand.

After visiting Honus Wagner at the main entrance behind home plate, we retraced our steps to the left-field corner to pick up our tickets: Section 116, Row X. Sure, it’s a few rows up, but it was dead-center behind home plate — for $27. You don’t get that kind of value in New York, and you certainly don’t get the view. Casey and I dove into our half-bucket of Quaker Steak and Lube wings while her mom and friend went off to find other eats. By the time we settled into our seats, a humid, rainy afternoon had dried up and cooled off. We sat comfortably in our packed section as the game began James McDonald hit the mid-90s on the radar gun (who knew?) and we marveled at the fact that the pitch display at PNC also shows the vertical and horizontal movement of each pitch. The information we can get these days …

The expected pockets of Cubs fans revealed themselves in the first inning, when Aramis Ramirez hit his 15th home run of the season to right-center field. The Pirates took the lead in the third when Neil Walker beat out an infield hit with two outs, scoring Alex Presley from third base and, impressively, Chase d’Arnaud from second. Off of Walker’s bat, it looked like a clean single to center, but Cubs second baseman Darwin Barney ran it down and made an off-balance throw to first, nearly getting the out to end the inning without any runs scoring.

Chicago regained the lead with two in the sixth on Alfonso Soriano‘s double, only to have the Bucs tie it up again in the bottom half when Andrew McCutchen — named to the NL All-Star team the next day — homered over the Heinz bottle on the center-field wall. The Cubs scratched out another run in the eighth for a 4-3 lead … and then it became a lot of fun. A walk, a flyout and a groundout left Walker on first base with two outs and Lyle Overbay coming to the plate to face Sean Marshall in a lefty-on-lefty matchup. Overbay didn’t wait, lining a first-pitch fastball to left field for a single, moving Walker to second. Cubs manager Mike Quade called on his closer, Carlos Marmol, to get the final four outs.

He didn’t get one. Well, he did, but by then, it was too late. Josh Harrison lined Marmol’s first pitch into center field for an RBI single to tie the game. Up stepped rookie catcher Michael McKenry, who quickly fell behind, 0-2, on two fastballs, one called and the second fouled back. Four straight sliders resulted in four foul balls before another 93-mph four-seam fastball, also fouled off — the sixth in a row. Marmol came back with another slider and McKenry connected for his first Major League home run, a go-ahead three-run shot to left field.

At that moment, Casey and I were walking back into the ballpark after stepping out to take pictures of the Bill Mazeroski statue just outside the right-field gate. As we crossed the Riverwalk to join her mom and Al behind the fence peeking out over the scoreboard in right field, the crowd erupted into the roar that accompanies a no-doubt-about-it home run. McKenry is the kind of guy Pittsburghers love, a third-string catcher (maybe lower) now getting frequent at-bats because of so many injuries to Buccos backstops. A working-class guy for a working-class city. And nerves of steel, apparently.

Xavier Paul grounded out on the next pitch from Marmol to end the inning, sending the game to the top of the ninth. We stayed in that spot above the right-field scoreboard — embedded inside the Clemente Wall — for the final three outs. With the crowd already amped coming off the home run from moments ago, this starts playing on the video board: 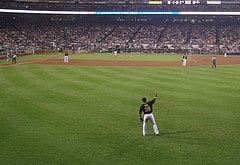 The fans were in a frenzy. Loud only got louder. Ramirez — he who gave the Cubs that early lead in the first — struck out, and Paul, the right fielder, raised a finger to the sky. Carlos Pena, meant to be the Cubs’ powerful offseason acquisition, bounced one back to Hanrahan for the second out. Paul raised two fingers above his head. Up next, with two outs and nobody on base, was Geovany Soto, the 2008 NL Rookie of the Year. Hanrahan’s first four offerings went called strike, ball, foul, ball for a 2-2 count. The first three pitches were 98-mph fastballs, followed by an 86-mph slider. The fifth pitch, another slider, fooled Soto. Strike three, swinging, Bucs win. Raise the Jolly Roger!

We turned and walked out to the Riverwalk and exchanged high-fives with a few 20-something guys who had taken full advantage of beer sales up through the seventh inning. “First place!” one of them yelled, clearly not aware that the Brewers hadn’t yet lost to the Reds (and wouldn’t). The Pirates didn’t make it to first place that night, but they just may before this season ends.

Later, after we’d walked back across the Clemente Bridge and along the river to our hotel near the Heinz History Center, I noticed that a Pirates fan had retweeted my photo from our seats behind the plate early in the game. I posted a brief reply and he (or she) came back with, “I wish I was there. You got to witness the best Bucs game in over a decade.”

I can’t speak to that myself, but I suppose Steel City baseball fans might know from misery. But it sure feels like something exciting is happening along the Allegheny River. 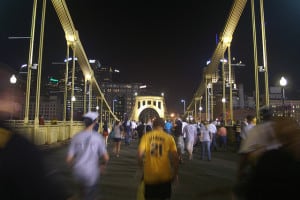