At one time, the acres of land southwest of Orlando, Florida, were undeveloped or consisted mainly of orange groves. But ever since Walt Disney established his World, the area has continued to grow. There are the theme parks — internationally based, water-based, animal-based and movie-based — a Downtown, a suburb (Celebration) and a whole Wide World of Sports.

After exiting the highway, you follow the signs — in a cartoonish Disney font — to your destination, turning this way and that, circling around it seems, disorienting yourself. Though I took the exit before 1 p.m., it wasn’t until 1:05 that I stepped out of my car and made my way across the parking lot to Champion Stadium, named, I realized once inside, for the apparel company, and not any kind of run of success by its spring tennant, the Atlanta Braves.

The ballpark sits among a collection of other attractions situated, in true Disney fashion, as a sort of Main Street microcosm. It’s nothing more than a wide concourse, an open-air mall of sorts, but with the paths intersecting outside the gates behind home plate and the nearby stores and restaurants having full-on facades, it still has the feeling of theme-park-as-neighborhood. 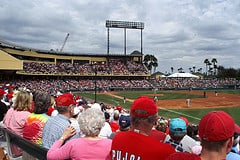 By the time I emerged from the tunnel and saw the field, Brian McCann was batting for the Braves in the bottom of the first inning. He singled in the first two runs in what became a 3-1 Atlanta victory. A healthy crowd — sprinkled liberally with fans in Cardinals red supporting the visiting team — sat in the sun, and though I walked out to my section of metal bleachers along the right-field line and found my seat in the back row, I never made my way across the legs of the half-dozen people already there. I stood the whole game, exploring the various angles of the ballpark. It’s a Disneyfied setup — the cartoonish font returns to mark the sections, and there are hardly any permanent Braves logos to be seen, because once April comes, this ballpark is home to the Double-A affiliate of the Tampa Bay Rays, the Orlando Rays. 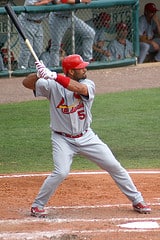 The best part of the experience, of this first moment at a Spring Training exhibition game, is watching a Major League game — even with a healthy dose of prospects and scrubs taking the place of the starts we’ll see come the regular season — in a minor league park. The little details that aren’t noticed from any Major League loge or mezzanine section are enhanced here: Adam Wainwright’s lanky height, Albert Pujols’ chin resting on his front shoulder in his batting stance, Mark Teixeira’s distinctive swing, Phil Niekro’s chalk-line-white hair.

Among other things, I noticed that the Cardinals are wearing their red caps with their road gray uniforms, a change from recent (regular) seasons, when they’d wear a navy blue cap with red “STL” logo. And in a fun example of lawn art, the outfield grass had a silhouette of Mickey Mouse’s head mowed into it.

As it is with players’ performance or rookies’ emergence, Spring Training can provide a hint of what’s to come when the season begins in earnest. Maybe the Cards 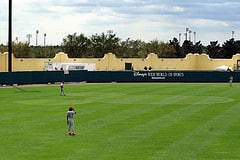 are doing away with the blue road caps (a shame, if it’s true). And maybe Pujols’ elbow injury won’t take away from his game that much, after all, because he’s still hitting the ball this spring the way we’d expect him to.

As I leave the ballpark and make my way across the sea of cars, I’m glad I made the Disney complex my first stop, because it’s the most anticeptic, generic, corporatized ballpark of the three I’ll see on this trip. I chose it over the Astros’ camp in Kissimmee, and I probably would’ve enjoyed that a little more for the atmosphere (and gotten to see Blue Jays ace Roy Halladay take on the Astros’ No. 1, Roy Oswalt), but Orlando proved to be a good choice because of the stars who played in this game — not just Pujols, McCann and Teixeira, but Troy Glaus, Jeff Francoeur, probable Cards Opening Day pitcher Wainwright and Braves pitching prospect Jair Jurrjens. Plus, I found out his first name is pronounced “J-air,” the sound of simply putting a “J” in front of the word “air.”

I follow the line of cars snaking its way out of the labyrinth of the Disney complex — parking here is free, something unique for me on this three-camp tour, but I hear later that the Braves charge fans to watch workouts, so in the end, it’s not as great a deal when you’re paying for each person individually, rather than by the carfull — and hit the overpriced toll road east to Titusville. I’ve got a little space detour before I continue the baseball portion of this trip.