I took a bit of a break from blogging, even the internet in general (just a little), the past few days, hence the lack of activity. And so I’m a little bit behind on a query over at Uniwatch on Monday that concerns this screengrab from an episode of King of Queens: 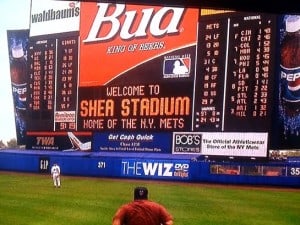 The question is: Which game is it? Knowing that the answer would be posted in the comments to the post, I did my own research before reading those, and we all came to the same conclusion: It’s from Sept. 8, 1999. Getting that was pretty easy. Never having seen the show, I first googled to find that the episode aired on Oct. 25, 1999, and presumed that it was filmed during the 1999 season. I then checked the dates when the Giants played at Shea Stadium that year, coming up with two three-game series, April 30-May 1 and Sept. 6-8. From there, it was a matter of matching the lineups — specifically the pitchers, Shawn Estes and Octavio Dotel. Estes started both the April 30 and Sept. 8 games, but it was Dotel who started on Sept. 8 for the Mets.

Knowing I had the date, I went to the comments to confirm that it had been answered, which it was. But a couple of questions remain, one of which is why the clock reads 9:19 a.m. (because it is daylight). Another is the fact that Brent Mayne and Rich Aurilia are reversed in the Giants’ batting order, and Daryl Hamilton (No. 18) and Roger Cedeno (19) are listed in the lineup for the Mets, but they were late-inning defensive replacements. One commenter also notes that the out-of-town scores are from Sept. 7, which you can see in the Cubs’ 2-1 win over the Reds (Cincinnati won, 6-4, on Sept. 8), and the late scores of several other games that have identical finals.
Here’s what I believe happened: The scene was filmed the morning of Sept. 9. The game on the 8th was a getaway game, with first pitch at 1:40 p.m. The next night, the Mets were on the road. So the production crew would’ve had all day on the 9th to shoot the scene. The 9:19 a.m. on the clock is probably accurate, and the scores were probably snapshots from two nights before. (As one commenter noted, “scoreboards in 1999 had a snapshot function, and the info was simply ‘copy and pasted’ from the night before.”) As for the right fielder in the screenshot above and in the clip, it’s got to be an extra in a Mets uniform, because he looks nothing like either Benny Agbayani or Cedeno, the two Mets who manned right on Sept. 8.
As you can see in the scene below, the dialogue was clearly shot at Shea, but the closely cropped view prevents seeing more of the stadium — probably because they only hired enough extras to sit in a few seats around Kevin James and the rest of the cast. (Same goes for when Leah Remini goes to the concession stand.) So the crew was probably on the field, as it appears to be when James goes onto the playing surface. While some movies have shot scenes in the stands during Major League games, this show clearly wasn’t. In the clip, James goes on to the field starting at about the 2:45 mark. Note the official game footage that shows the foul ball that starts the sequence features a Mets-Reds night game — June 1 vs. the Reds, because the pitcher, you’ll see, is Orel Hershiser:
As to why the Mets’ lineup shows Hamilton and Cedeno in the game, when they were defensive replacements and did not start the game, I suspect that the lineups may have been input by hand (hence the flipping of Mayne and Aurilia). Cedeno entered the lineup as Agbayani’s replacement in the top of the seventh and Melvin Mora replaced Rickey Henderson (No. 24, leading off) in left field in the top of the eighth — but Hamilton didn’t come into the game until the top of the ninth. In other words, Hamilton and Cedeno were not in the game together with Henderson still manning left. So a snapshot of the lineups is not likely. I suspect someone from the Mets input the lineups and either wasn’t a regular operator of the scoreboard or simply did it quickly, without bothering (or really needing, in those pre-HD and DVD days) to ensure accuracy. So maybe the person started with Henderson leading off, but then chose Hamilton and Cedeno by the lower half of the batting order. As for the pitchers’ spots still showing Estes’ No. 55 and Dotel’s No. 29? To me that’s a simple explanation: They were the pitchers of record. Estes took the loss and Dotel got the win.
The only way we’d ever know anything for sure is if someone from the Mets or the King of Queens production crew recalled the details of that day, and I’m not expecting either scenario. In the absence of any insider confirmation, I’m comfortable with my hypothesis.
« The Cobb Field story
Another blanking for Brodeur »