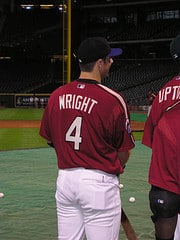 With All-Star Game balloting ending Thursday night at 11:59 p.m. ET, one stroke before midnight, I’m going to do all I can this week to promote David Wright for third base. There are several reasons for this campaign of mine, all of which I’ll reveal in daily posts between now and then.

For this first, brief one before I go to bed, I simply offer the first photo I ever took of Wright, during batting practice at the 2004 All-Star Futures Game in Houston. I was on the field with a press pass and got a shot of him talking with his Double-A manager, Ken Oberkfell, and his Virginia childhood pal B.J. Upton (you can see his name to the right of Wright).

Too bad he was given a black-with-blue-brim Mets hat for that game.

So get started! Click on the Vote Wright link at the top of the right column on this page and let’s see him starting in Anaheim on July 13.