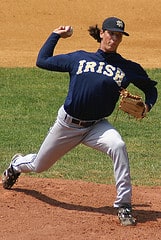 Jeff Samardzija on the mound

Rather than drag out the process, Notre Dame two-sport star Jeff Samardzija signed a five-year deal with the Cubs on Friday that guarantees him $10 million and means an end to his NFL dreams.

Prior to last June’s draft, Samardzija said he hoped to play both sports as long as he could. But then his “hometown” Cubs took him — “hometown” in the sense that a kid growing up in northwestern Indiana, as Samardzija did, will probably choose the Cubs or White Sox as his team, and “Shark” was drawn to the Northsiders.

That changed things, and he and the Cubs chose Friday’s team convention to announce the deal.

As he got his first taste of pro ball, pitching seven games between the Cubs’ short-season Boise affiliate and their low-Class A Peoria team, he was drawn more to the bush-league life, it seems. He drove to Idaho shortly after the draft — but before he’d signed a contract, such was his dedication to what he knew would be a short initiation to the minor leagues. But who does that? Who drives to the team he’ll be joining as a negotiating ploy? Usually, amateur players are heading to school as a threat that they’ll enroll rather than sign unless their contract demands are met.

In his short time with Boise and Peoria, though, Samardzija seemed to enjoy the experience (including an amusing Xbox anecdote) so much that in signing his deal on Friday, he insisted that the contract read that he must return his $2.5 million signing bonus should he go back to catching footballs — or pursue any sport other than baseball.

My guess is that, in addition to the security that this baseball deal offers, Samardzija was drawn to the mound because of several other factors. For one, his signing bonus likely surpasses what he’d make from his first NFL contract — and those things are not guaranteed.

I also wonder what projections he was hearing regarding the draft. With several top juniors foregoing their senior seasons — Calvin Johnson, Dwayne Jarrett, Ted Ginn Jr. (though I don’t know if he’s strictly a better receiver — as a prospect — than Samardzija) — to enter the draft, Samardzija’s draft stock was falling. His performances against top defenses like Michigan and LSU — while not horrible — may have also raised enough doubts in scouts’ minds about how he would handle the bump-and-run world of the NFL.

Finally, it sounds like his career upside is brighter — and likely much longer — on the diamond as opposed to the gridiron. Those who know such things — or at least project them — seem to think that if he were to devote all his efforts to improving his pitching, he could be a No. 2 starter in the major leagues. With a high-90s fastball and good command of his changeup and slider, there are some who put his ceiling as a No. 1 starter.

It’ll be interesting to see how his spring goes, how he takes to pro ball in spring training and how his season starts down at Daytona. His ability suggests he should make it to Double-A Tennessee sometime this season, though no one’s making any predictions on when he’ll get his locker at Wrigley Field.