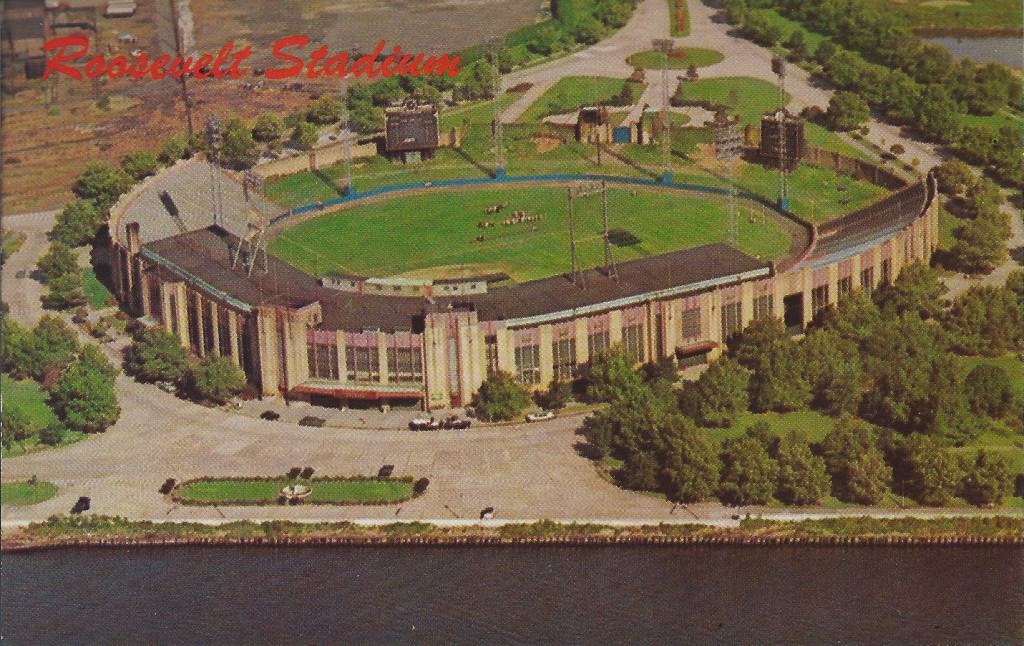 Home of the Jersey City Giants and Jerseys. (Personal collection)

Before Shea Stadium opened 51 years ago on April 17, 1964, the Mets played their first two seasons in the Polo Grounds. This we all know, because Shea Stadium wasn’t ready when the Mets joined the National League in 1962. What I didn’t know was that, as late as the summer of 1961, there was talk about whether the as-yet-unnamed stadium for the recently christened new team in Flushing would be completed by the start of the 1962 season.1 Contingency plans were put in place, and the Mets ended up playing their home games at the Polo Grounds for two seasons before moving to Queens. But playing in upper Manhattan, across the Harlem River from Yankee Stadium, doesn’t appear to have been a foregone conclusion. Before we get to how that all came to be, let me reconstruct the timeline a bit.

Almost immediately after the Dodgers and Giants left for California after the 1957 season, New York began efforts to bring National League baseball back to the city. (There was also an effort to create a third major league, the Continental League, backed by William A. Shea and Branch Rickey and planning a New York franchise owned by Joan Payson.) MLB Commissioner Ford C. Frick appointed a four-man committee in December 1957 to study territorial rights and what areas were considered “open” or “closed” to possible expansion or relocation. A month later (imagine that!), the committee reported back, recommending that “any community which has a population of 2,000,000 or more within its city limits shall be eligible for a second major league club”2, provided that club were in a different league from that of its intracity neighbor. This designation meant New York was open territory for the National League, as was Detroit; Los Angeles and Philadelphia were therefore open to the American League3. Chicago, the only city with two established clubs in January 1958, was not eligible, because the committee also recommended that no more than two clubs could operate within one city. The Willie, Mickey and the Duke era was officially over.

Initial efforts to return National League ball to New York focused on relocation — and immediate relocation, in time for the ’58 season. The Times noted that Reds owner Powel Crosley Jr. “recently had threatened to take his club out of Cincinnati and hinted about moving to New York, unless city officials in Cincinnati did something about improving the club’s parking facilities.”4 But the Reds would have been moved to Ebbets Field in Brooklyn, not the Polo Grounds, because “another provision of the proposed new rule stipulates that where two clubs operate in one city, their parks must be at least five miles apart, unless by common consent, the two clubs agree to use the same stadium.”5 (This is ironic, because one of Dodgers owner Walter O’Malley’s issues with Ebbets Field was its limited parking.) So there was also a slim chance that we could have had the New York Reds, not the Mets, and instead of Mr. Met, Mr. Redleg would be shooting T-shirts into the stands during “Lazy Mary.”

Between the end of the ’57 season and the October 1960 announcement that New York and Houston would gain NL expansion franchises, the Reds, Pirates and Phillies were all mentioned in articles speculating potential teams that might move. But by the time the expansion franchises were awarded, all clubs expressed happiness with their current cities.6 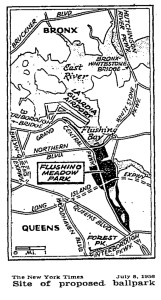 Political red tape prevented final approval of the Flushing Meadows ballpark until March 24, 1961.7 Further negotiations delayed groundbreaking until that fall, but by June 1961, it became apparent that the new stadium in Flushing Meadows Park would not be ready in time to opening the 1962 season. When ground was broken on Oct. 28, 1961, The Times in its article the following day8 cited the expected opening as April 22, 1963 (which is interesting, considering that the 1962 schedule wasn’t announced for another six weeks).9 Of course, that target was missed, too.

That meant finding a home for 1962, and sharing Yankee Stadium seemed out of the question. Even though neither team — the Mets, run by former Yankee general manager George Weiss, nor the Yankees — seemed to indicate the sharing the Bronx ballpark was a possibility, the media apparently brought it up on occasion, prompting a 1961 spring training headline in The Times that read: “Yanks Reluctant to Rent Stadium to New Team.”10 The Polo Grounds always seemed to be the logical choice. Why the Giants’ former home and not the Dodgers’? Ebbets Field, empty after the Dodgers departed (and with no Reds team using it), was demolished in 1960. The Polo Grounds, however, remained in use by the New York Titans football team from 1960-63.

While this haggling was going on, another offer emerged. International League president Tommy Richardson offered up one of his ballparks in the area: Roosevelt Stadium, then home to the Triple-A Jersey City Jerseys.

“I  have spoken with Charlie Hurth (Mets’ general manager),” Richardson told Fred Cranwell of the Jersey Journal, “and he has indicated the club would probably be interested in playing here. We could work out the schedule so the Mets and the Jerseys would never be home at the same time.”11 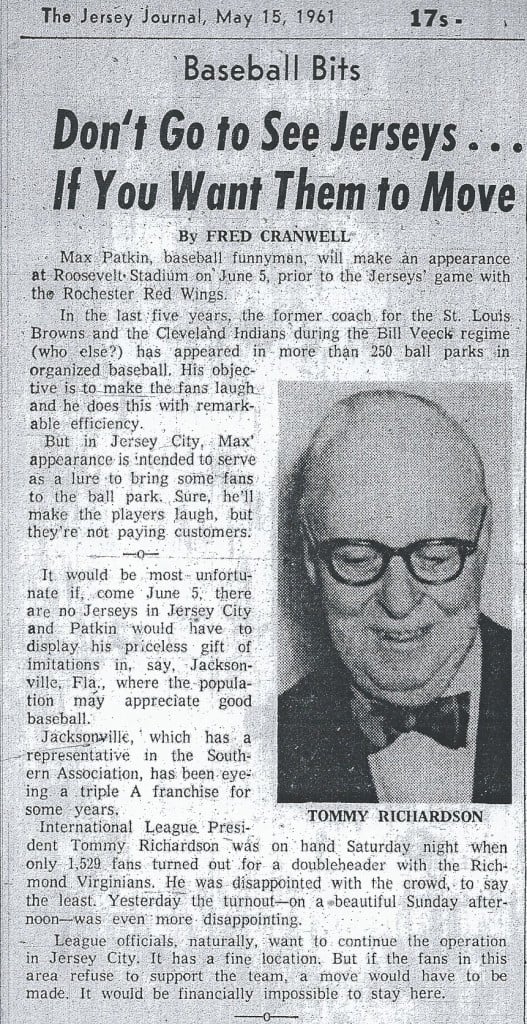 After the Jersey City Giants left for Ottawa in 1951, Roosevelt Stadium didn’t have a team to call its own for nearly a decade. The Dodgers played 15 home games there in 1956 and ’57 before the Havana Sugar Kings moved in during the 1960 season. But the Jersey City Jerseys, as the Sugar Kings were renamed, never drew all that well.

International League President Tommy Richardson was on hand Saturday night when only 1,529 fans turned out for a doubleheader with the Richmond Viginians. He was disappointed with the crowd, to say the least. Yesterday the turnout — on a beautiful Sunday afternoon — was even more disappointing.

League officials, naturally, want to continue the operation in Jersey City. It has a fine location. But if the fans in this area refuse to support the team, a move would have to be made. It would be financially impossible to stay here.12

The article continued, citing the Sugar Kings’ low attendance for the 1957 season — just 85,000 that year — and noting the reason the team moved was the political unrest created when Fidel Castro assumed power. And then this:

It’s no secret that the New York Mets of the National League are thinking of using Roosevelt Stadium as a possible base of operations next season. Should they visit Roosevelt Stadium they would have to be impressed with the park. It is major league. But just one glance at the crowd and they would have to think twice before gambling on coming here. The Jersey City crowds this season have proved bush league.13

I was unable to find the original mention of the Mets’ interest in playing in Jersey City cited by The Sporting News and alluded to by the Journal above (perhaps because the microfilm archives at the Newark Public Library do not include Sunday editions), but several stories in May 1961 touch on the team’s poor attendance. As it turns out, arranging for both the Mets and Jerseys to play at Roosevelt in ’62 wouldn’t have been a problem — the minor league club moved to Jacksonville after the ’61 season.

It’s unclear whether the Mets ever really considered Richardson’s offer, though it’s probably unlikely. Hurth, who resigned as the club’s general manager in May 1961 and was replaced by Weiss, the team president, may have taken Richardson’s call. And frustration over the slow pace of negotiations over the new ballpark, not to mention discussions with Giants owner Horace Stoneham over use of the Polo Grounds, may have made the Mets eager to secure a home sooner rather than later. In addition, a brief report on the same page of The Sporting News that quoted Richardson also speculated that the Jerseys could be on their way out of Jersey City because of low attendance and an inability to sell its radio or TV rights.14

Considering that the only mention of a “Jersey City Mets” possibility outside of the city itself was that two-paragraph Sporting News brief — not even a mention in The New York Times that I could find — I suspect this offer was more of an effort by Richardson to boost his league and the floundering Jersey City franchise. The International League in 1961 had franchises in Buffalo, Columbus, Jersey City, Richmond, Rochester, Syracuse, and Toronto. On May 19, the San Juan Marlins moved to Charleston, W. Va., consolidating the circuit in the Northeast. It is likely that a transfer of the Jersey City franchise to Jacksonville, Fla., which was also cited in the Jersey Journal article of May 15, 1961, was not something Richardson was eager to do with his league footprint otherwise rather small.

Roosevelt Stadium would go 16 years without a team calling it home until the Jersey City Indians of the Eastern League used it in 1977. In ’78, the A’s teamed up with Jersey City for its Double-A affiliate, but after a winter storm knocked over two light towers, the club moved to Waterbury, Conn., and the ballpark was torn down in 1985, leaving the Garden State without affiliated baseball until the Trenton Thunder arrived in 1994.