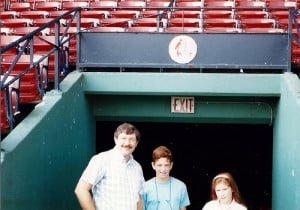 Dad, sis and me

I’ve been to Fenway Park several times over the years (seeing the Yankees twice, once more than I’ve seen the Red Sox in the Bronx), but the first trip wasn’t for a game.

My family stopped to visit my mom’s cousin in Arlington, Mass., on our way up to Maine (our annual August migration). I knew the Red Sox were out of town — probably by picking up a newspaper, because I’m not sure even cordless phones were in wide use yet — but I still wanted to see Fenway Park, then 77 years old. (In ’89, the year SkyDome opened, two years before New Comiskey and three before Camden Yards changed everything, Fenway was one of five pre-Depression ballparks; now it’s one of two. And Camden Yards is the 10th oldest ballpark in baseball! I find that remarkable.) So on a day trip into the city, we made our way to Yawkey Way. It was a hot and humid day, a detail I recalled when looking at the hazy skyline in the photo of right field below.

As we walked along Van Ness St., we saw an open gate, through which we could see into the darkness of the narrow concourse beneath the first-base stands. Light shone through a ramp out to the seats, and I may have caught a glimpse of the Green Monster. As we stood there looking — feeling the cool, damp air emanating from the concourse — an employee walked by and recognized us as tourists. It may have been the mesh-backed Mets cap on my head.
He said hello and chatted with us for a moment before inviting us inside, waving us up the ramp for a look at the field. “Just take off that Mets cap first,” he said to me with a smile. (He was joking. I think.) “And please stay at the top of the ramp.” I did doff my cap, either out of fear of a stranger or respect for the Fens, resulting in the wonderful example of pre-teen hat head in the photo above.

We probably spent no more than two minutes gazing out at all that green of the grass and the wall and the red of the seats. The tarp was stretched out in right field, drying off (I think it may have rained the night before). I seem to have a memory of this visit being the day after the end of a homestand, which would put the date as Monday, Aug. 7, 1989. A couple of groundskeepers tended to the field. I took a couple of photos (seen below) and my mom snapped the pic of my dad, sister and me above. Then we headed back down the ramp, across the concourse and out onto the street. And I knew we had just received a treat.

I made it back for a game two years later, my dad and me getting seats in the second row behind the Yankees’ bullpen in right field. I saw the ballpark come to life then — and again in 1993 (vs. the Rangers), 1994 (Yankees) and 2009 (Mets). The fans were always there, even without seats atop the Monster or a right-field roof deck. No matter how you feel about those additions, the best thing about them and all the other enhancements made in the last decade is that they will ensure that Fenway lives on, so that those of us who made our first visit in the ’80s — or before — can relate to those who made — or will make — theirs in the 21st Century. 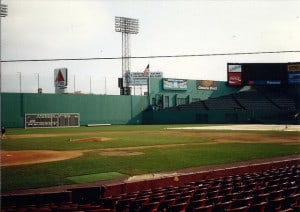 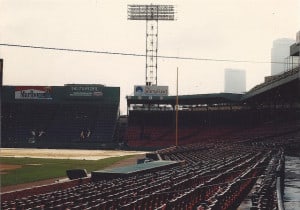 And a couple of a cap cart on the street outside: 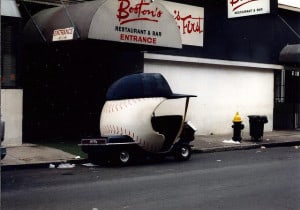 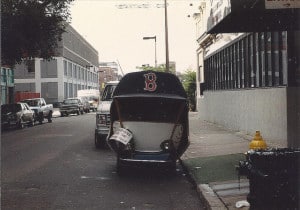 « Recognizing the trailblazer
The Dodgers return to New York »