This is the problem with having a blog but not being diligent about updating it through the season. I’ll start a post but then get distracted or bored or tired and will leave it for later. And then it will completely slip my mind, and “later” is then defined as “months after I started.” So in an effort to turn some of these drafts into posts, I’m going back to finish them off, continuity and relevance be damned. Sadly (for me), this first effort, a review of a visit last July to Cleveland, will be truncated and less detailed than if I’d written upon returning home — or even returning to our downtown hotel, within a convenient walk and with a top-floor room with a view of the ballpark. Procrastination: It kills (memories). 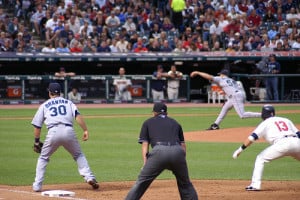 Progressive Field, home of the Indians, was my 24th ballpark (16th active), and though it’s considered one of the “new” ones because it opened in 1994, after Comiskey Park and Camden Yards, it’s now the 13th-oldest ballpark in baseball. That is, more than half of the current parks are newer. I mean seriously, think about that: More than half of baseball’s 30 teams play in stadiums built in the last 20 years. In the NL East, the home of the Marlins is the oldest park, opened in 1987. In other words, the Mets’ last World Series title predates every ballpark in the division. When the Marlins move into their new stadium in two years, Atlanta’s Turner Field — built for the 1996 Olympics — will then be the oldest of the five in the NL East, meaning each one will have opened since I graduated from high school.

Jacobs Field was actually the next stadium to open after Oriole Park, so the two of them share the distinction of being at the front of the “retro trend” in stadium design, the move away from grand, hulking, massive arenas on the edge of the city limits to more cozy, intimate parks nestled into downtown or other neighborhoods. But what if the White Sox had accepted the Oriole Park blueprint instead of going big when they built the new Comiskey Park? The whole alignment of new parks as we know them might’ve been skewed. 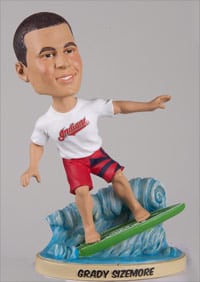 My wife and I were there on one of the Indians’ “retro Saturdays,” when the team wore their off-white alternate uniforms, the night had a theme (ours was Beach Night) and the fans walked the concourse with their bobblehead giveaways — Surfin Sizemore in our case — in their arms. We watched a cover band sing Jimmy Buffett tunes from a stage set up by a temporary beach on the plaza outside the left-field gate, then took our time walking around the concourse to our seats on the first-base side. We got dinner, sampled several local brews and enjoyed the breezy comfort of a Midwestern, Rust Belt summer evening. At a souvenir stand on the right-field concourse, I chose my retro hat as Casey tried to convince a middle-aged man to buy a four-foot tall Chief Wahoo statue for $250.

From our seats just past first base, we had a great view as the players hustled down the line on groundouts and base hits. Ken Griffey Jr., Ichiro, Grady Sizemore, Shin-Soo Choo, Victor Martinez and the rest made the turn to the infield on a base hit or veered into foul territory when their batting average took a hit. When Franklin Gutierrez hit a two-run homer with Griffey on in the fourth, the two met at home plate and tapped their helmets against one another to celebrate.

That homer proved to be the difference as the Mariners won, 3-1, and with a listless Indians offense against Jarrod Washburn, it was clear when the Tribe scored in the seventh that it would be too little, too late. We spent the last few innings walking the concourse some more, getting one last beer in the bottom of the seventh and pausing at different vantage points for a different view. On the way out, Casey stopped to photograph the vegetable mosaics lining the walkway along 6th St. past Quicken Arena (home of LeBron) as the ballpark crowd filed past us. The pedestrian mall of 4th St. was loud and lively, the neon of the restaurants and bars casting a Kodachrome glow over our faces. We walked into the majestic lobby of our hotel in the historic Guardian Bank Building and rode the elevator to our top floor. Out our corner window, I looked over the rooftops to the soft glow coming from the ballpark. The toothbrush-like light towers were dimmed, leaving enough light to illuminate the seats and field for cleanup crews to finish their tasks for the night. Just to the right, 4th St. glowed with a bright energy.

« Firing up the DVR for Cobb Field
The Cobb Field story »