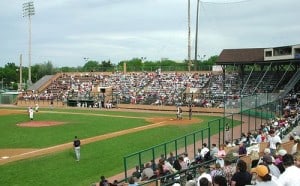 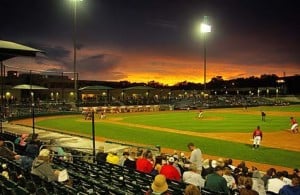 I put the Golden Globes on the backburner last night to watch Cobb Field: A Day at the Ball Park on MLB Network. Part of the Reel Hardball series (“Movies Out of Left Field”), the documentary chronicled a game day at the home of the Billings Mustangs in Montana back in 2007, Cobb Field’s final year after six decades of American Legion baseball and six decades minus six years as a minor league park. The production offered much in the way of history and insight to the field’s contribution to the national pastime.

The Cobb name in baseball usually prompts thoughts of the Georgia Peach, but perhaps not for students of Hollywood history. The Cobb name on the Billings ballpark came from Bob Cobb, a Billings native better known as the Tinseltown-based owner of the famous Brown Derby and the inventor of the Cobb salad. He had baseball in L.A., too, as the owner of the Pacific Coast League’s Hollywood Stars. To raise money for the ballpark in his hometown, Cobb turned to his Hollywood connections for investments, getting money from Bing Crosby, among others.

A ballpark built in the ’40s, however, doesn’t offer much for the 21st century. By 2007, Cobb Field was the only ballpark in the eight-team Pioneer League that had not been replaced or renovated. The visitors’ clubhouse consisted of little more than a bench beneath a high shelf along three walls. The visiting manager’s “office” was nothing more than a plywood table attached to a wall, the cramped shower room contained a mere six units and the bathroom consisted of one sink, one urinal and one toilet — all for a team of 20-plus players, coaches and traveling staff.

The nature of the short-season circuit, which starts play near the end of June and finishes just over a week into September, allowed for a unique circumstance for the Mustangs. Cobb Field was demolished in one week in September 2007 and its replacement, Dehler Park, was ready for the 2008 season — on the same spot. Those fans who had been coming to N. 27th St. in Billings to watch baseball as children will continue to come to the same spot with their kids and grandkids. There may be no easier snapshot of the great distance from short-season A-ball to the Major Leagues than this Cobb-to-Dehler transformation of that plot of land.

Dehler Park shows up at the end of the movie for a comparison. Fans and staff are asked their thoughts and some wide shots provide a chance to compare and contrast. The photos above are the best I could find that showed a similar vantage point. Dehler is visibly smaller than its predecessor. The grandstand doesn’t rise as high as Cobb’s did, and the press box (not visible) fits into the concourse behind the plate rather than sitting perched atop the roof over the fans. Dehler, though, spreads out more down the lines, including grass berm seating. While Cobb fit 4,200 on its bleachers, Dehler has 2,571 seats and 500 bleachers to go along with the berm seating.

Over the years, Billings has seen the likes of George Brett, Paul O’Neill and Trevor Hoffman, and the movie features Toms River’s own Todd Frazier. The game featured in the film was actually Frazier’s professional debut after he was drafted from Rutgers. He singled in a run in his first at-bat, helping the Mustangs on their way to a victory on the featured night.

For those of us who have never seen a game in Billings (or Batavia or Greensboro or any other number of low-minor league towns), the film’s relevance is in the fans’ relationship with the ballpark and its team. As historic and quaint Cobb Field was, Billings probably needed a new ballpark to remain viable (here’s the oft-used comparison) in an age where digital movies, the internet and increasingly technical leisure-time pursuits provide a less interactive entertainment experience. Dehler Park gives Billings what Cobb Field couldn’t, just as Lakewood, N.J., did for the BlueClaws, who before 2001 were playing on a community field (it could hardly be called a stadium) in Fayetteville, N.C., as the Cape Fear Crocs. Fayetteville wouldn’t approve a new ballpark, Lakewood did, and new ownership bought the franchise and moved it north. Billings won’t have to worry about that now.

Callan Films’ Cobb Field: A Day at the Ball Park airs again this morning at 10:30 ET on MLB Network and Thursday at 2:30 a.m. It’s also available for purchase.

« The breezy comfort of a Midwestern, Rust Belt summer evening
The ‘King of Queens’ at Shea »