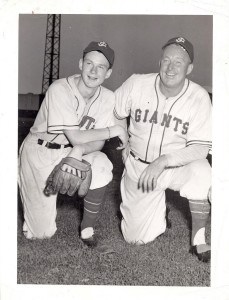 Something occurred to me on Monday night as I watched the Giants celebrate their first World Series championship since moving to San Francisco. I looked over at my blue Jersey City Giants cap, the white “JC” outlined in red, and thought about the two minor league affiliates that used to play in Trenton and Jersey City. (The photo at right shows Hall of Famer Gabby Hartnett and his son in 1944. Hartnett managed the Jersey City Giants from 1943-45.) I then realized that the last five World Series winners all have or had minor-league ties to the Garden State:

The Giants’ connection isn’t solely from the ’40s, however, because their starting second baseman, Freddy Sanchez, played for the Thunder back when he was a shortstop in Boston’s system. In fact, each of these past five champions have had significant contributions from someone who spent a season in New Jersey on his way to a World Series ring: Yankees second baseman Robinson Cano (2003-04 with Trenton); Phillies catcher Carlos Ruiz (2001 with Lakewood), first baseman Ryan Howard (2002 with Lakewood) and World Series MVP Cole Hamels (2003 with Lakewood); Red Sox first baseman Kevin Youkilis (44 games with Trenton in 2002) and Cardinals shortstop and World Series MVP David Eckstein (1999 with Trenton). 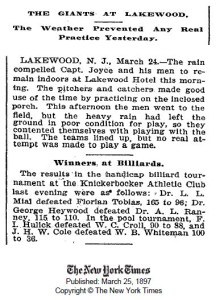 But the Giants may have the earliest New Jersey connection of any World Series champion (aside from the fact that the entire game itself was born in Hoboken): they held spring training in Lakewood back in 1897. I had known that they trained on John D. Rockefeller’s Lakewood estate from 1943-45, when teams were restricted in their travel during World War II. But in searching for some articles on that, I came across a few in the New York Times archive describing the club’s 1897 preseason preparations. I’ve included one here as an example.
New Jersey may not have a Major League team of its own, but it continues to make significant contributions to the game 164 years after its birth on the bluffs overlooking the Hudson.
« Happy Halloween!
Quick thoughts: 2010 Rookies of the Year »