Did a little Jackie Robinson research this morning, prompted by the 1956 Topps card shown above. I was curious as to when the slide into home may have occurred, presuming the scene depicted was based on a photograph of an actual occurrence. It was the number of the batter, really, that piqued my interest — who is that? Through good deduction, dumb luck or whatever, it only took a few clicks to come up with the answer.

First, I suspected that it was a steal of home, because of the position of the batter so close to the plate, with his bat on his shoulder, gave me the impression that he had just stepped back. If Robinson was scoring on a hit, the batter would probably be further away from the plate, perhaps giving direction on whether — and where — to slide. Second, I figured that the opposing team was the Cardinals, based on the catcher’s stirrups.

So I simply went to Baseball-Reference’s Play Index (before I came across that list of Robinson’s steals of home) and got the list of games in which Robinson stole a base against the Cardinals, then started clicking through box scores. Neither of his stolen bases in the two-steal game were of the plate, but the second one on the list — August 29, 1955, was, and the play-by-play confirms that it was when starting pitcher Johnny Podres — No. 45 in your ’55 Dodgers scorecard — was batting. Furthermore, Cardinals catcher Bill Sarni wore No. 15 in ’55, and that certainly looks like a 5 on the back of the catcher; even if it’s a 6, Sarni wore 16 in previous years with St. Louis.

Perhaps even more noteworthy: It was a triple steal to boot! That event didn’t warrant much mention, however. In the New York Times story the following day, it had one paragraph dedicated to it, 10 grafs into the story. Podres’ plunking of Stan Musial in a back-and-forth brushback spat grabbed the headlines and the photo. Musial was hit in the hand in the fourth inning but wasn’t replaced until a double-switch in the seventh. (X-rays were negative, and he was in the lineup in Pittsburgh the next day.) 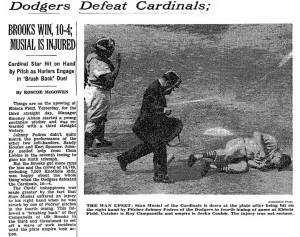