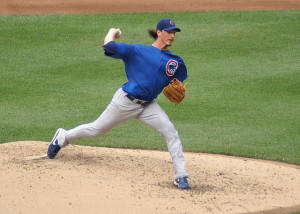 When Jeff Samardzija delivers the first pitch of the Cubs’ season on April 1 in Pittsburgh, he’ll be the fourth pitcher to come out of Notre Dame and make an Opening Day start in the Major Leagues.

The last Domer to toe the rubber as a starter on Opening Day was Ed Reulbach, when he raised the curtain for Brooklyn at Ebbets Field on April 14, 1914, manager Wilbert Robinson‘s first game at the helm. Fellow Notre Dame grad George Cutshaw started behind Reulbach at second base and a future manager manned right field: Casey Stengel.

Brooklyn — nicknamed the Robins in the days when nicknames were a bit more fluid (they had been and would again be the Dodgers) — won, 8-2, over the Boston Braves with two runs in the second, one each in the third and fourth and four more in the fifth. Reulbach went seven innings, allowing two runs, six hits, one walk and striking out five. He had a hit and a walk at the plate, the free pass coming in the two-run second, which may have produced more runs had Reulbach not been caught trying to swipe home on a double-steal.

With Reulbach on third and Dalton on first the double steal was tried, but Whaling fooled Reulbach by feigning a throw to second and caught him between the bases. — The New York Times, April 15, 1914

The start was Reulbach’s second on Opening Day. He’d previously done so for the Cubs in 1911, a game that ended in a 3-3 tie after 11 innings. And the only other Domer to get a start in his team’s opener was Willie McGill, who got the start for the Chicago Colts (later the Cubs) in 1893. Chicago lost that game to Cincinnati, 10-1.

So teams are 1-1-1 on Opening Day when a former Notre Dame player throws the first pitch. Whether or not Samardzija gets the decision, that record will change on April 1.

« The Eagles: A sporting band
The six covers of SI’s 2013 baseball preview issue »