Actually, that should be covers. For the first time in the 59 years of SI baseball preview issues, the magazine has printed true regional covers, six in all, with a main image customized for four different regions of the country: Northeast, Mid-Atlanic, South, Midwest (both Rust Belt and Plains) and West. My comprehensive look at the history of the baseball preview covers has been updated to include this year, but in this post I’m going to take a closer look at each of the six produced for the 2013 season, in the order of success I think they’ll have.

But first, what these covers do for the totals. By featuring six starting pitchers, SI widened the gap between starters (31) and the next-most-frequent position, outfielders (19). Five of the six players made their baseball preview cover debuts, pushing the total number of players shown over the years to 70. We’ve also got a team represented for the first time, bringing us up to 25 of the current 30 clubs, leaving out only the Blue Jays, White Sox (a bit surprising), Astros, Marlins and Braves (also quite surprising).

So here are the six 2013 preview covers listed, in my mind, from least deserving to most, with “deserving” defined as ideally being the favorite (or at least a top-two favorite) to win its division. 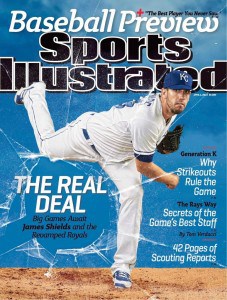 Shields is the only one of the six this year to fulfill one of two themes that have come up frequently: a player on a new team or a player on the defending champions. The right-hander, of course, was traded to Kansas City (most of the “new team” players were free agents, with the Phillies’ Roy Halladay in 2010 another trade exception). Shields is the first Royal on the cover since David Cone in 1993 — when he was new to Kansas City after signing a free-agent deal.
The Royals are certainly an interesting story this year. They added Shields, Wade Davis (in the same deal) and Ervin Santana to the rotation and they have a deep, young core with Salvador Perez, Eric Hosmer, Mike Moustakas, Alex Gordon and Billy Butler (and you can add Alcides Escobar and Lorenzo Cain to the list if you’d like). And though expected to be dominated by the Tigers, the AL Central is otherwise a pretty balanced division, or at least one in which the Royals could make some noise. But I just don’t see them as one of the top two contenders — that’d be Detroit and Chicago — like four of the other five covers feature. 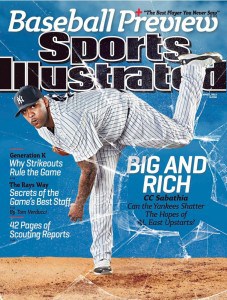 This is the issue that arrived in my mailbox today. Despite the cover (which I knew I’d receive), it was a pleasant surprise, because what used to be a regular Wednesday (Thursday at the latest) appearance in my mail has, over maybe the past year, become more of a Thursday-if-I’m-lucky/usually Friday/occasionally Saturday treat in the mail. So to have it the first day I could conceivably expect it was nice.

As for the cover subject, let’s put this out there now: The Yankees are there because SI didn’t want to omit the huge New York market. Robinson Cano would’ve been the better choice, but it certainly looks like these six cover subjects were chosen because they’re all pitchers (clearly, I haven’t flipped through the issue — or read the headlines — yet). But if you ask me, the Yankees don’t fit the criteria of a top-two contender in the division, either. With their age and all the injuries (not mutually exclusive), I think they’ll have an uphill battle to catch Toronto and Tampa Bay. The Yankees have holes at catcher, third/first base (wherever Kevin Youkilis doesn’t play, and at least until — though maybe after — Mark Teixeira returns) and wherever Vernon Wells plays (but to be fair, SI had its preview in the bag before that deal went down). 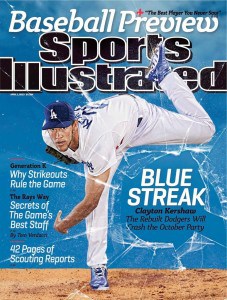 Kershaw is the first Dodger to grace the preview cover since Kevin Brown in 1999 — the year he (wait for it) began a seven-year deal with Los Angeles. He was baseball’s first $100 million man, signing for $105 million. The Dodgers are certainly one of the big storylines of the upcoming season, and it wouldn’t have surprised me to see them featured nationally, had SI gone that route. But they still have to take on the defending World Series champions — who didn’t get a regional cover, despite a worthy hurler in Matt Cain, who I probably would’ve gone with over Shields. L.A. is a strong contender, easily a top-two pick in the NL West, but among these cover candidates, I think it has the fourth-best chance of winning the division. 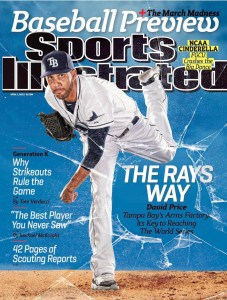 With this image, Tampa Bay became the 25th active club to have a player featured on a preview cover. Not even the 2008 collection of ’05 draft picks included a (Devil) Ray. (That’s because Tampa Bay selected Wade Townsend eighth overall, passing on Red Sox coverboys Jacoby Ellsbury and Clay Buchholz, not to mention Andrew McCutchen, Jay Bruce and Matt Garza, to name a few.)

Price is an apt choice as the defending AL Cy Young Award winner, the head of a strong, young pitching staff and a stud who’s about to come into a big payday of his own. Plus, the Rays have a great chance to contend in (and win) an AL East that sees the Red Sox still trying to get their footing, the Orioles having made no major changes to the luckiest team in Major League history (an unprecedented — and likely unrepeatable — 29-9 in one-run games, not to mention 16-2 in extra innings) and the Yankees aging before our eyes. Sure, the Blue Jays are loaded after a busy offseason, but just ask the Marlins — several of whom are now in Toronto — how that worked out last year.

I should say, too, that the Blue Jays — particularly R.A. Dickey — would’ve been a great choice for a cover, too, but I wonder if he was omitted because SI is an American magazine and choosing a regional cover for Toronto might not fit into their marketing plans. The Jays have never been featured on a preview issue before (though the Expos have), but it certainly wasn’t going to happen as a regional option. 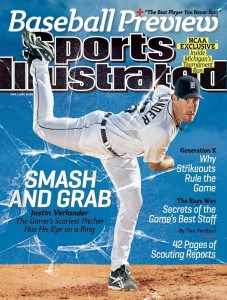 In reality, I’m considering this one a tie with the next one. In fact, I think Detroit has a better chance of winning its division, but I’m listing it here for a reason I’ll get to in a moment. But as I said in discussing the Shields cover, it’s going to take a mighty effort by the White Sox, Royals or Indians to overtake the Tigers in the AL Central, and with that lineup and this guy heading the rotation, it’s unlikely.

Surprisingly for a franchise that’s had Sparky Anderson, Kirk Gibson, Alan Trammell, Cecil Fielder and currently the best pitcher in the game, Verlander marks the Tigers’ first appearance on a preview cover since Bill Freehan represented the defending champs on the 1969 cover. 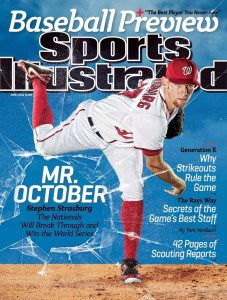 While I do think Detroit has a better chance of winning its division than Washington, I list this as the most deserving cover because the Nationals are SI‘s pick to win the World Series. In my mind, they’ll have a tougher time fending off the Braves than the Tigers will holding back any of their division opponents, but if the magazine is picking the team to go all the way, then give it the cover, I say.

Strasburg represents D.C.’s second preview cover appearance, after Ryan Zimmerman on the 2008 fold-out issue. The previous Washington franchises — both iterations of the Senators — never got the honor. As I noted in the cover analysis post, my friends in Virginia aren’t happy about the cover jinx touching their team, but one rationalized that it’s only 1/6th of a jinx, on account of the regional covers.

We’ll see about that. But one thing’s sure: After what was seen as a surprising run to the NL East title last year, the Nationals won’t be sneaking up on anyone this year. They’re the favorites, and everyone will be gunning for them.