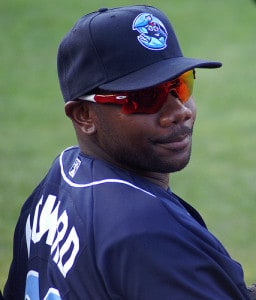 Looking back on his time in Lakewood

As a Mets fan, it’s tough to see Ryan Howard do well. As a baseball fan, it’s a treat.

The big man (who, to this point, has managed to avoid a nickname that’s stuck, as far as I know) is a bonafide superstar and a personable fellow who always gave me the comments I needed, both in 2002 as a developing first baseman with the BlueClaws and in the few times I’ve run into him since.

Last night in Lakewood, I took the night off, attending the game as a fan as his number was retired and he got three at-bats in a rehab start for the BlueClaws. It was Howard’s second appearance at FirstEnergy Park since reaching the Major Leagues; in 2007, he played in two rehab games, including an 11 a.m. start I attended. Afterward, Howard joked that he couldn’t remember the last time he had woken up so early. 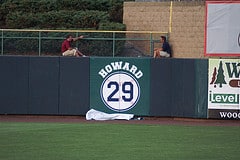 This appearance was a more common 7:05 p.m. start, delayed a few minutes by the pregame ceremony to retire the No. 29 that Howard wore in 2002 and again last night. (In his 2007 rehab, he wore his Major League No. 6, which I saw on a fan in the stands.) His mother and brother were on hand and the No. 29 was unveiled on the center-field wall, to the right of center, far enough to the side to be clear of the batter’s eye.

Part of what I love about Ryan Howard is that he remains a humble man. Yes, he’s made a few contract demands in his time in Philadelphia, but other than that, you don’t see any showboating from him, no showing up opponents and no grandstanding. He’s one of the few Phillies who come to mind who (as far as I know) hasn’t taken shots at the Mets on the radio or at victory parades or dropped f-bombs on live television (twice, Mr. Utley). I’m not saying he needs to be accomodating to his opponents, but he certainly treats them with respect, not only during the game, but afterward as well. He just lets his play speak for itself, not seeing any need to supplement it with verbal digs.

This graciousness has shown through during both of the rehab games I’ve seen him play in Lakewood. I’ve seen other established Major Leaguers back in the minors, most recently Shane Victorino and Carlos Delgado 10 days ago at Triple-A Lehigh Valley, but I haven’t seen any of them interact and become one of the boys as much as Howard seems to do. That’s not to say that Victorino, Delgado, John Maine, Robinson Cano, Phil Hughes and Derek Jeter have been standoffish or aloof, or even that the circumstances were the same. It just seems to me that Howard has gone out of his way to just blend in as one of the guys when he’s been back in Lakewood — even if he stands out as a big, hulking anomaly.

Case in point: in the big leagues, Howard is among the pajama-pantsed set. In Lakewood, he walks the high-socks walk with the rest of the BlueClaws. And he did in 2007, too.

Howard admitted last night that Lakewood “holds a special place” in his heart, so perhaps that’s why he seems so at ease when he returns. And, of course, there’s no guarantee he’ll make it back again before the end of his career, which is why it was nice that it worked out so well last night. The BlueClaws had originally planned to retire his number on Sept. 2, an off-day for the Phillies and my birthday, on which I’ll be flying to Chicago and wouldn’t have been able to attend. But when it was announced that the Phillies and Rockies would make up a rainout that day in Colorado, Lakewood had to postpone the retirement ceremony. It worked out for them when Howard went on the DL with his ankle injury and the Phillies gave him to Lakewood for one night of rehab.

Howard’s appearance may have kept Greensboro’s Chad James from history. The hard-throwing left-hander (he was in the mid-90s in the first inning) came into the game with a 3-9 record and 5.32 ERA. He did not allow a hit until the sixth, when Howard crushed an opposite-field double to left-center, driving the ball over the outfielders’ heads to score Leandro Castro. In Howard’s two previous at-bats against James, he walked and grounded out to second as the Grasshoppers employed the drastic shift, putting the shortstop behind second base and the second baseman in short right field. James finished with six innings, one hit allowed, five walks and three strikeouts. He improved to 4-9 and lowered that ERA to 5.09. Two ‘Hoppers (I have no idea if they’re called that) relievers allowed just one more hit and two more walks in a 4-1 win.

Lakewood manager Mark Parent sent in a pinch-runner after that double, allowing Howard to jog off the field to a standing ovation and ending his night after three at-bats. He’s scheduled to play for Triple-A Lehigh Valley tonight and could be back with the Phillies on Sunday. Last night may very well have been the last time a Lakewood BlueClaw will don No. 29 — unless Howard has another rehab appearance somewhere down the line.

« Sensory overload
For the love of … the game »