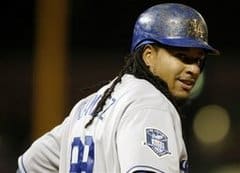 Manny Ramirez came to the plate with the bases loaded last night in the Dodgers’ game against the Nationals, and Arturo and I agreed that the career grand slams record is one we’d like to see him break. Arturo is a huge Yankees fan and I’ve long admired Lou Gehrig, an appreciation I have maintained even as my disgust for the Yankee brand has grown. Gehrig is the throwback of all throwbacks, a hero in black-and-white, an American icon and a tragic story.

The grand slams record was set around the time when Babe Ruth’s career home runs record was established, and that mark was passed 35 years ago. Ruth hit his last home run in 1935, holding the record for 39 years. Gehrig retired in 1939, but he hit his final grand slam on Aug. 20, 1938, meaning that this record has stood for 70 years — almost twice as long as Ruth’s 714 stood before Hank Aaron surpassed it. It was a pursuit we were eager to follow.

But now that pursuit is on hold, if not derailed, by Manny’s 50-game suspension. I got a text alert from MLB.com at 12:10 p.m. and my jaw dropped. I read some of the online coverage, I turned on MLB Network and flipped over to ESPNews at times. When I saw Manny’s statement in which he blamed a medication prescribed by a doctor, part of me felt relieved that there was a chance he didn’t try to cheat and that he wasn’t denying his guilt or trying to fight the suspension. But then I turned skeptical, thinking that’s an easy excuse. Blame the medication, blame the supplements, like J.C. Romero did. But ultimately, the player has to take responsibility for what he puts into his body. That’s why Barry Bonds’ proclimations of innocence ring hollow, because few could believe that someone as in shape as he is and as dedicated to the game as he was would ingest something that carried the risk of harming him or indicting him.

As far as the Dodgers are concerned, Manny’s suspension couldn’t come at a worse time. Last night, they established a new modern record for consecutive wins at home at the start of a season with their 13th. Their press release even broke down their home record since Manny Ramirez joined the team (they’re 31-7 in the regular season). With one more game against the Nationals tonight, it looked like the record had a good chance of being extended to 14 games before the Giants come to town this weekend. But now we’ll get to see how the players react to losing their left fielder and cleanup hitter, if they’re inspired or deflated, if the record adds a game or stops here.

Though maybe this comes at a good time for the Dodgers, if it had to happen. They’re 21-8 and have a 6 1/2-game lead over the Giants. They’ll get Manny back early in July, a month earlier than when they got him last year, when they were two games out of first with a .500 record and he gave them the jolt they needed to surge into the playoffs. If they’re still in first when he returns, or within a series’ distance of whoever sits in front of them, they’ll still be in the driver’s seat. But if the Giants or D-backs or someone else is going to make a move, they’ve got 50 games, starting now.

The suspension begins tonight and will bench Manny until July 3, barring rainouts. He’ll miss 28 home games. Fans in Philadelphia, Florida, Colorado, Texas, Anaheim and both the north and south sides of Chicago won’t get to see him when the Dodgers come to town. Fans in Chavez Ravine will head to Mannywood without being able to see its namesake.

If no games are postponed, Manny’s return on July 3 will come in San Diego, when the Dodgers begin a three-city road trip heading into the All-Star break. He’ll play at PETCO Park, Citi Field and Miller Park before he gets back to Dodger Stadium after the All-Star break. He probably would’ve had a ticket to St. Louis for the All-Star Game with the start he’s had, but not now.

Manny’s last grand slam came on July 5, 2005, against the Rangers and Chris Young — who now pitches for the Padres. He’ll return within days of that date, with the potential to face Young. With the way Manny’s been hitting since moving to L.A., it seemed certain that there’d be one or two slams to come this year alone. It seemed like we were seeing the happy Manny, the one who jumps around like a kid on the field and high-fives fans in the middle of a play. The possibility that the official Grand Slam Watch for No. 23 would commence with Opening Day 2010 seemed high.

But now more than ever, we don’t know what to believe.