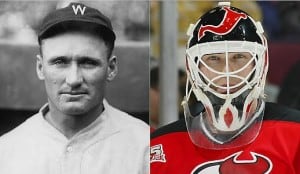 Martin Brodeur shut out the Dallas Stars tonight, 4-0, for the 106th whitewash of his career. He now stands four behind Walter Johnson’s pitching record for the most by a North American team sport athlete.

Though it’s not the same (though what is in this made-up “chase”?), if we were to count postseason stats, too, Johnson has 111 shutouts with one blanking in his six World Series games. Brodeur has 23 in 176 postseason games. But of course, Johnson played in an era when one out of eight teams in the American League made the World Series, the only postseason series at the time. And Big Train didn’t get there until 1924 and ’25, when he was 36 and 37. Brodeur plays in an era in which eight out of 15 teams in each conference can qualify for the postseason, so his chances of postseason play are much greater.

But going back to regular-season games, Johnson pitched shutouts in 110 of his 802 games, or 13.7 percent. Brodeur’s 106 have come in 1,038 games, a still-respectable 10.2 percent. Though as with many baseball arguments comparing players from Big Train’s Deadball Era and today’s supplement- and ballpark-enhanced Power Era, Johnson was a pitcher in a time that favored them over the hitters. Brodeur, conversely, is a goalie in an era that favors scoring. Terry Sawchuck, whose record Brodeur broke, compiled his 103 shutouts in 971 games, giving him a slightly better mark, 10.6 percent, than Brodeur’s.