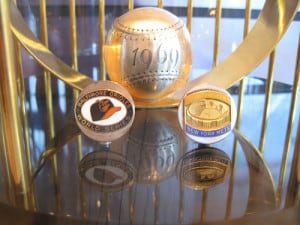 Earlier this week, I went to the Mets’ website and searched for tickets to last night’s game on Stubhub. I considered two seats in the front row of the Pepsi Porch — I can’t wait to sit there, hanging over right field — but then when I checked the weather and saw 50 degrees and a chance of rain, I thought better of it. Instead, I bought Promenade Club tickets that also gave us access to the Acela Club — providing us with three options (they had Caesar’s Club access, too) to get out of the cold, rain and/or wind.

Smart planning, if I do say so myself, but I’ll get to that. We arrived early to walk through the new Hall of Fame and Museum in the rotunda. Unlike Opening Day, there was no line, so we could take our time without being crowded. It’s a great display of the team’s history and a nice touch going into the club’s 49th season, giving them some space to work with next year for any 50th anniversary exhibits they may consider.

I particularly enjoyed the uniform displays. There’s a timeline that shows examples of each style worn throughout the team’s history, plus more jerseys in the front to highlight various players and moments in the last 48 seasons. Looking at the sizing tags gives some idea of the evolution of ballplayers’ physiques — David Wright wears a 48 jersey, Tom Seaver wore 44, Jerry Grote caught in a 42 and Bud Harrelson sported a 38. Manufacturers and technology probably play a part in jersey sizing over the years, but I can’t imagine there’s a Major Leaguer today who wears anything smaller than a 44. And those who do go that low are the likes of Alex Cora (I checked on one of his game-worn jerseys for sale on the concourse, $200 for a white Coolbase version), not any pitchers of Cy Young ability.

I also dug the World Series press pins. The four from 1969, ’73, ’86 and 2000 are on display, and the ’69 and ’86 ones are also mounted at the center of the Commissioner’s trophies. Compared to the sparse Yankees trophy in Trenton on Thursday night, these are blinged out. Of course, press pins are probably a thing of the past anyway.

Another historical touch comes as the result of the lineup’s new display at the top of the escalators in the rotunda. Above a field level concession stand on the first-base side are nine Topps reproductions of former Mets: Keith Hernandez, Rusty Staub, Cleon Jones, Wally Backman, Ron Darling, Tug McGraw, Bernard Gilkey, Bud Harrelson and Robin Ventura. It’s a fun collection to look at, both for the card designs and the players themselves … except for Gilkey. Really? He’s one of the nine Mets chosen for this display? The obvious question is, Why not Piazza? But there are a host of other candidates for the spot: Koosman, Matlack, Carter, Alfonzo, Garrett, HoJo, Mookie, Gooden, Strawberry, Knight, Olerud, even Hundley. Or even Nolan Ryan.

I didn’t dwell on it much. From there, we went on to a pregame dinner at the Acela Club and watched the game from the Promenade Club, out of the wind, until the eighth, when we decided to split a Shackburger and didn’t have to wait in line for it — though did have to wait for them to make it. It was there as we waited when Jeff Francoeur hit his second home run of the game, establishing two interesting marks. It was the first four-homer game for the Mets at Citi Field and the first time two Mets hit two home runs each at home since Shea’s first year, 1964. Earlier, while in the Promenade Club, I noticed a graphic on SNY that showed visitors hit 79 home runs at Shea in 2008 and 81 at Citi in 2009 — perhaps another indicator that the Mets’ lack of power in ’09 was not because of their new ballpark but more an indication of their depleted lineup and, hopefully, a change in approach for the one constant in the lineup through the season, namely David Wright. So if Rod Barajas and Francoeur can hit two apiece and Wright can pound one off the wall on a chilly, windy night, I’m hopeful there’s a rebound afoot this season.