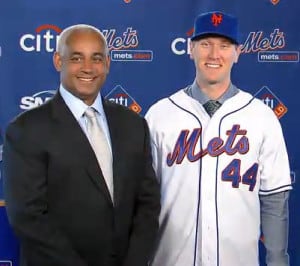 Jason Bay was introduced to the New York media today and handled himself rather well in the face of some tough questions. He declined to answer whether any other teams were close in their offer with what the Mets offered, but he did not try to say it’s not about the money. “Don’t get me wrong,” he said. “The money’s nice. But the bottom line is that I wouldn’t be here if I didn’t want to be here.”

When asked about Peter Gammons’ comment that Bay would rather play in Beirut than Queens, he criticized the remark. Bay also said that his shoulders were not an issue, despite reports that said there were some red flags there. He said that he had surgery in 2003, but hasn’t had any problems since.
But what really had me watching on MLB.com today was to see what number he chose. Bay wore No. 38 in Pittsburgh, but switched to 44 in Boston. Forty-four has been donned by a few notable players in Mets history, mainly David Cone and Mike Cameron, but 38 has a less illustrious past — and has only been worn by one non-pitcher. Bay could have made that number his own in Queens, but instead he’ll stick with 44. 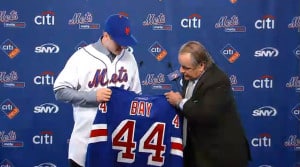 And what was up with hockey Hall of Famer Rod Gilbert presenting Bay with a Rangers jersey? Are the Wilpons stepping up their efforts to get next year’s Winter Classic at Citi Field? Obviously, there is the Canadian connection, of which Gilbert spoke, and I guess this was exactly what it looked like: Another small gesture to help make Bay feel welcome in his new city. I’m not sure if the Mets approached the Rangers, or if it was the other way around, but I wonder what the Islanders think about it.
« Now pitching, from ‘3rd Rock’
Tiger Stadium’s scoreboard placed in a Fenway replica »