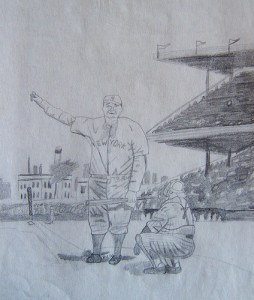 As a kid, I became fascinated by Babe Ruth‘s called shot in the 1932 World Series. Not so much the legend that, in an important game for the championship, the game’s greatest player predicted a home run and then followed through; instead, I became enthralled by the question of whether he really did point to center field, and then deposit the next pitch in that direction.

So I created this drawing, probably based on a print I saw of this painting. I figured The Babe’s 118th birthday was a good day to post it. Yeah, his head’s too small in proportion to his body, and the catcher looks like a child, though I could explain that away as artistic license used to depict The Babe as larger than life. But I’m a bit impressed by the detail in the uniform and a decent reproduction of his chicken legs.

We’ll never know the truth, but considering Ruth’s affinity for trash talking, it’s possible he became the first player to call his shot. Or maybe he just gestured at the Cubs’ bench or pointed at the pitcher, jawing at them the whole time. Either way, it made for some great drama.

« The Mayor at the Mayor’s Cup
The Eagles: A sporting band »