So just like Keith Olbermann, the first 2011 Topps card I laid eyes on after opening my first pack of the year was that of Russell Branyan. And the one beneath it was also Alex Rodriguez. 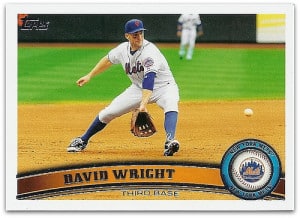 But things got quite a bit better from there in the one $4.99 rack pack I bought at Target. For all the bad luck Paul had in pulling multiple Yankees and Phillies, I came away with four Mets cards, including David Wright’s base card — showing him in the home white uniform and blue hat, a double win. Out of all the packs I bought in 2010 — Series 1 and Series 2 — I’m pretty sure I was shut out of Wright base cards; I ended up buying it on eBay with a couple others I wanted but didn’t pull in my purchases. Other than the aforementioned A-Rod, I got the Robinson Cano Toppstown card and A-Rod on a diamond foil AL RBI leaders card — and that was it for Yanks or Phils. 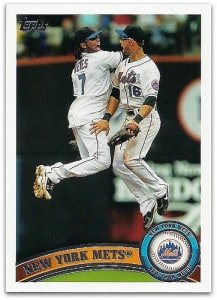 The Mets team card featuring Jose Reyes and Angel Pagan in a celebratory postgame leap in the home whites is probably my favorite team card in a long time. I also got Dillon Gee’s rookie card (in the black jersey; blah) and a Diamond Duo featuring Hisanori Takahashi and Koji Uehara. The beauty of Takahashi in a white uniform and blue hat on a bright, sunny day was tempered a bit by the fact that he’s now an Angel.

Other cards of note included Hanley Ramirez, Andrew McCutchen (love the kid), David Price, Aroldis Chapman and a Diamond Anniversary reprint of Jackie Robinson’s 1952 Topps card. The one Kimball Champions reprint I pulled was Justin Upton. The cards are nice enough, but I’ve never really chased the limited subsets in recent years. I’ll probably buy individuals of the Mets or other favorite players, but I’m not sure I’ll keep a checklist if I find myself buying boxes of 2011 Topps.

There were also a few cards that I enjoyed for the photography. Scott Hairston is shown in one of the Padres’ brown-and-mustard throwback uniforms; Randy Wolf is depicted in a closely cropped action shot on a horizontal card; and the Orioles team card shows three players in mid-leap after a win, multiple arms and legs seemingly emanating from one body. 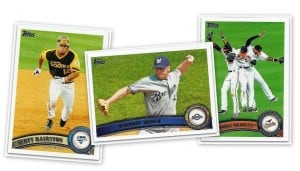 This year’s design is decent. I do like the arcing panel for the players’ names and the baseball in the corner housing the team logo, but after thoroughly loving last year’s design with the club logo — often the uniform logo — designating the team, this set is a minor step back for me. The love for last year’s design may be what prompted me to buy more packs (and 36-pack boxes for the first time since I was a kid in the early ’90s) last year, so I’m not sure how much money I’ll spend on packs. Maybe I’ll just buy individual cards online. We’ll see.