I still remember April 15, 1997, when I sat in a lounge in my dorm at Notre Dame and watched as Jackie Robinson’s No. 42 was retired throughout baseball by Bud Selig, standing at a podium at Shea Stadium. Behind him stood Jackie’s widow, Rachel, and President Bill Clinton. The significance of the occasion, the 50th anniversary of Robinson’s debut with the Dodgers, was clearly underscored by the presence of these heavyweights. That night inspired me to write a short story based on Robinson’s debut for a class that semester. If I ever dig it up and decide I’m not going to try to have it published, I’ll post it here.

But in that rec room at O’Neill Hall, 700 miles from home, no Major League baseball within two hours, I felt a bit of pride at being a Mets fan far away from New York that night. I’m sure the choice of Shea Stadium for the ceremony had more to do with the Dodgers being in town than the Mets being home, but maybe only a little. New York, after all, was the city in which Jackie played all 10 years of his career. He worked in the city, lived in Connecticut, died there and was eulogized and buried in New York. When the Dodgers left for Los Angeles — a year after Jackie retired … after being traded to the Giants — Jackie remained in New York. He may have starred in four sports at UCLA, but once he left L.A. and made his way through Kansas City and Montreal to Brooklyn, New York was where he stayed.

The Dodgers, of course, do a fine job of celebrating their history, even the Brooklyn Era now more than 50 years since they left the borough, and they deserve to have Robinson as a focal point of their legacy. But if there is one place where Jackie’s impact should have a permanent footprint, I think it’s New York.

I first started contemplating this argument a year ago, when Mets fans regularly criticized the Jackie Robinson Rotunda at Citi Field. That commotion has died down a bit this year, now that the Mets have made an active — and admirable — effort to celebrate their own history (because they’re not going to be adding much to it this year, I’m afraid), and I’m glad. I love the Robinson Rotunda. I don’t look at it as celebrating the career of a Dodger; I see it more as championing the life of a man who changed not just baseball, but America. Ebbets Field is gone and now, too, so is Yankee Stadium. The only place left in New York to truly get close to Jackie is his gravesite. Roosevelt Stadium in Jersey City, where he played his first game for the Montreal Royals, is also long-gone and the city’s cool statue stands miles away from the stadium site, near a subway station in the Journal Square business district. Brooklyn has a middle school and a statue where the minor league team plays, but Coney Island is a long way from Sullivan Place. Even Robinson’s Hall of Fame plaque is different from the one he knew. 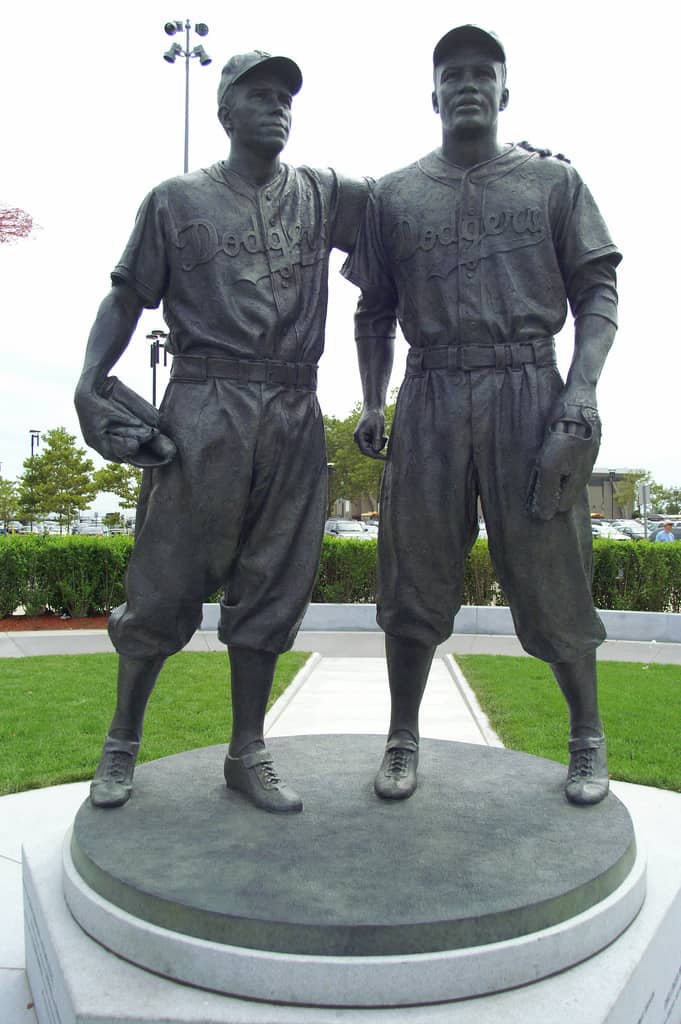 Robinson obviously has a connection to L.A., but it’s as a college athlete, even if that’s all Los Angeles had in the ’30s. He made his name in New York, and it’s what he did in New York that he’s known for across the country. The Yankees wouldn’t set aside a corner for Jackie if they were the only team in New York. I have no problem with Mariano Rivera continuing to wear No. 42 for the duration of his career, but up until a few years ago, they refused to include it among the retired numbers at the ballpark, when the other 29 clubs had long displayed the number on their walls. So to me, Queens, the borough bordering Brooklyn, and the Mets, the National League successor to the Dodgers, are the next best option for a baseball shrine to one of its seminal figures.

I’m not old enough to remember a burning Bronx (I — or my family — celebrated my first birthday only that September) let alone three-team summers in New York. A lot of what I know of the Dodgers in Brooklyn comes from Doris Kearns Goodwin’s memoir, but after reading that book, I had a strong feeling that if I had grown up in the ’40s or ’50s, I would’ve been a Dodgers fan. So maybe that’s why I’m proud that it’s the Mets’ ballpark that is home to a great tribute to a great man who died four years before I was born and whose lasting legacy did little for me, personally, beyond giving me the opportunity to watch guys like Darryl Strawberry, Dwight Gooden, Torii Hunter, CC Sabathia and Jason Heyward play ball.

The rotunda’s a great way to enter a ballpark, and for all the unique touches designed for the stadiums built since the early ’90s, it may be the most inspired and unique. Petco Park and Oriole Park may have their warehouses, Coors Field the Rocky Mountains in the distance, Busch Stadium the Gateway Arch, PNC the Pittsburgh skyline and AT&T McCovey Cove — but those were already on-site and the architects just had to work them into their designs. The rotunda, obviously copied from Ebbets Field, was resurrected, and just as a generation of Dodger fans recalled walking through it in Brooklyn, a lot of young Mets fans today will grow up to have what hopefully become fond memories of Citi Field’s rotunda.

This year marks just the third time since 1997 that the Mets have not been home on April 15. Only in 2000 and ’03 did they wear gray uniforms, and those weren’t even official Jackie Robinson Days — the moniker took hold in 2004. The Mets are 8-4 on April 15 since the ceremony at Shea in ’97 and have won six of their last seven on this date. Both road games prior to today’s happened to be in Pittsburgh, in 2000 (a loss) and 2003 (a win). The one loss since ’04 came in 2006, with the 2007 game getting rained out when a nor’easter hit the East Coast, wiping out several games that Sunday. The Mets honored Robinson at their next home game, the following Friday, and lost to the Braves, but because the game wasn’t played on April 15, I’m not including it in the 8-4 record.

Today, they’ll honor Jackie in Denver and 14 other cities. But every day, he’s honored in New York. 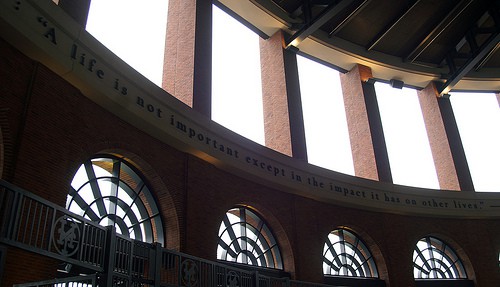