When Mets Police and Deadspin noted that the Jets were pre-selling AFC Champions gear, I chuckled and posted it on Facebook, but I didn’t dwell on it much more than that. It seemed a bit presumptive on the one hand, but I also figured it made some sense for the team to get ahead of the curve — and ahead of Modell’s and Sports Authority and the like — and maybe get a few fans to commit a few days ahead of time. 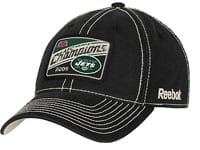 And then yesterday, a feature about Rex Ryan and two of his assistants in the New York Times noted the gear on sale at the end of the story — and also said that the Colts, Saints and Vikings also had conference champions gear (with the Super Bowl logo) available for pre-order. So then it was no longer a Jets thing — it’s an NFL thing. I don’t know if the league mandated the pre-sale, encouraged it or simply made the gear (or at least the images of them) available for the teams’ respective online shops. And of course there have already been shipments of the apparel to the physical team stores, the Superdome and Lucas Oil Stadium and the local sporting goods stores in the greater metropolitan areas of Minneapolis, Indianapolis, New Jersey/New York and New Orleans — all so that they can begin selling and distributing the souvenirs as soon as the game goes final (not to mention pass out the hats and T-shirts to the players on the field).

As for the presale, maybe the NFL figures it’ll get some new online customers out of it, a few more e-mail addresses, a few more credit cards stored in online accounts (which would encourage repeat customers). The rapid rise and broad reach of the NFL didn’t happen without strong marketing, so the league obviously knows what it’s doing. However, while the internet makes it easy and inexpensive to set up a presale like this, I can’t think of one true fan who would take the risk of jinxing his or her team by placing an order for conference championship gear before the game kicks off. Plus, those fans are going to want their gear on Monday morning –not Monday afternoon or Tuesday or Wednesday or whenever even the fastest shipping on a pre-order would get it to them — so they’ll go to their local stores or the downtown team shops first. Even those transplanted fans across the country and around the world who would have to shop online because the local stores won’t have the gear will likely wait until the clock reaches zero for the fourth time before clicking “Add to cart.”
I can only dream about someday having this dilemma with the Mets.
« Mets can’t miss out on Sheets, too
No run for New York on the offing »