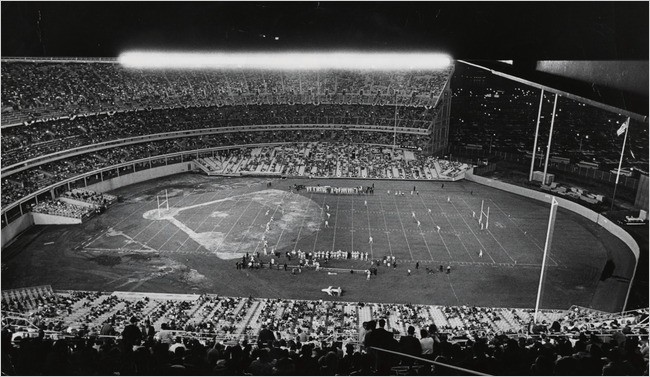 The Jets are about to play the last football game at the Meadowlands, and though I was 7 years old when they first kicked off there, I don’t remember their first game in New Jersey, or their time at Shea Stadium. Growing up on the Jersey Shore, I did not get into football until the late ’80s, and my first love was the college game. I gradually began following the NFL, then really got into it when I started playing fantasy.
So today’s story in the New York Times on the Jets’ history from the Polo Grounds to Shea to the Meadowlands piqued my interest, particularly the above photo, which shows the layout of the gridiron at Shea. I did not realize that, during the Jets’ tenure in Queens, the field-level seats seemed to have been movable. Not only are they missing from behind home plate, but it looks like those seats and those that would be down the third-base/left-field line have shifted over and stretch into left field. Same goes for the first-base/right-field sections. The position of the foul poles in both corners — in that photo, they’re now surrounded by seats — gives an indication of the adjustments. It must have been after the Jets left and Shea became a baseball-only stadium that those sections were permanently affixed in place. 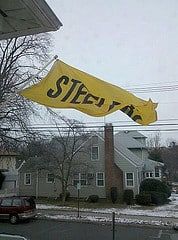 The Jets’ final game at Shea came on Dec. 10, 1983, a 34-7 loss to the Steelers, a fact I did not know when I bought the flag shown in the photo on the left. The flag was one of those flown above Shea during the Jets’ days there; it was part of the extensive online auction held following the end of the 2008 season. I’m not sure how the flags were flown for football, but one way or another, this flag may have been flying above the stadium during that final Jets game. It’s one of two I know were available for auction over the past year, so I don’t know how many they had. I also don’t know how many might have flown for football games. For baseball, before 9/11, when they switched to all American flags ringing the top of the structure, they flew pennants with the names of the cities in the National League. (I bought one of the Pittsburgh ones; my wife is from there, hence the interest in these flags.) If they did the same for Jets games, the chances that the flag I own flew during that final football game is 50-50, or worse. But if they chose the flags based on the opponent that week, then I figure my flag must’ve been one of those flapping in the December Queens wind.
In any case, it’s there on my front porch today, both to bring the Steelers a little luck on this final day of the season and as a small, in-the-know nod to the Jets’ final game in their previous home as they prepare to end their tenancy there and move into the fourth in their history.
« Hockey at Citi Field?
Now pitching, from ‘3rd Rock’ »