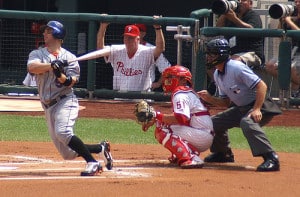 So David Wright’s path to the All-Star Game just opened up with Placido Polanco going on the disabled list. He won’t be eligible to come off until after the break.

But that’s no reason to sit back and consider it a job well done. While Wright may be a near-certainty to make the team, I’d still love to see him start, and if Polanco wins the fan balloting, the starter will be left up to the manager — the Phillies’ Charlie Manuel at that. Of late, All-Star managers have often deferred to either the next-highest vote-getter or the winner of the player vote at the position (if the fans’ choice is not one and the same) to get the start. So why leave it in Manuel’s hands? Let’s keep pressing “Submit” on those ballots and get Wright to the top.

(Granted, Chase Utley joining Polanco is also good as far as the Mets and NL East race are concerned, but not necessarily for the “This Time It Counts” crap and home-field advantage in the World Series. And I’d also like to see the NL just win one and start turning the tide back their way. Jason Heyward missing the game is also a blow to the NL but, again, a potential boon to the Mets, especially because they Braves over the weekend before the All-Star break.)