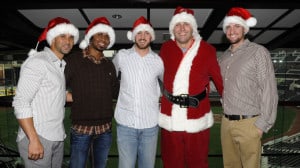 It happened to Tim Allen’s “career,” too, but it seems that playing Santa has its drawbacks, as noted in the New York Times:

Jeff Francoeur played Santa Claus at the Christmas party, a role that has often come with its share of misfortune the following season. In 2004, Mike Cameron played Santa, then had a serious outfield collision with Carlos Beltran the following August that put him on the disabled list for the remainder of the season. In 2005, Kris Benson was Santa and was then traded to the Orioles a month after the party. It is believed his wife Anna’s provocative attire at the party contributed to the trade. In 2007, John Maine was Santa and had an injury-plagued season, and last year it was Mike Pelfrey, who struggled in 2009.

« Keep an eye on those Red Sox
‘Fixing’ the game, and not in the Black Sox sense »