My gut feeling is that Ken Griffey Jr. is a prima donna. A baseball diva — a divo, if you want to masculinize it.

I went to Monday’s Mets-Reds game early to take some pictures during batting practice. I arrived at 4:30, 10 minutes before the gates open to the fans, and took a spot above the Reds dugout, on the third-base side. I was there more for a view of the Mets during their hitting session, and to avoid what I expected would be a crush of fans on the home dugout side.

My position allowed me to watch David Wright warm up at third base and gave me a perfect view of the Reds as they emerged from the clubhouse. The first thing I noticed was that players on both teams tended to wear other warmup jackets or shirts, rather than their BP jerseys. My practical side figured this might be because the other options are cooler than jerseys on a hot, humid June day, as Monday was. My cynical side figured the thinking was that the more casual fans shouting from the stands wouldn’t know who they were without the names or numbers on their backs. 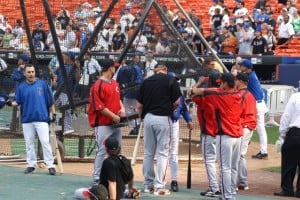 The Mets’ Paul Lo Duca (left) and the Reds’ Austin Kearns
(on the ground, stretching) and Adam Dunn (center, in black)
and several other Cincinnati players chose not to wear their
batting practice jerseys.

It worked, in some cases. When Reds first-base coach Billy Hatcher came to the top step of the dugout, the uninformed in the stands thought he was a left-handed reliever who makes his living in Colorado this season: Ray King. Unfortunately, I didn’t think to take a picture of Hatcher, because if I didn’t know that King was in Colorado, I might’ve made the same mistake myself.

So while Austin Kearns, Adam Dunn, Ryan Freel and the rest of the Reds emerged to take their cuts in the cage and pickup grounders in the infield or shag flies in the outfield, one name never popped out of the dugout, one face and its well-known smile never gave the fans a nod of the head and tip of the cap.

That would be Griffey. 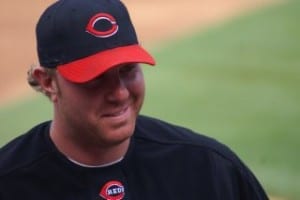 Adam Dunn stands out before the game. 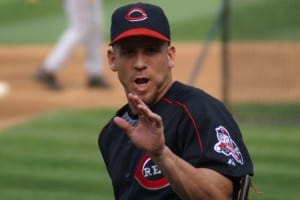 Ryan Freel waves hello to the fans shouting his name.

I’m guessing Griffey either had some nagging injuries and, to protect himself, he opted out of batting practice. He also could’ve used the first-game-of-the-series out, though that holds less water when your previous game was a Sunday afternoon home game and your travel schedule didn’t necessarily involve checking into the hotel at 4 a.m. The other option is that Griffey took his pregame swings in the cage beneath the stands, choosing that location to either keep out of the sun or away from the fans.

Dunn, however, made Griffey’s absence minimal, because he put on a show during BP that probably hasn’t been seen around baseball since the Mark & Sammy Show in 1998. Dunn’s home runs were Home Runs, moon shots out to right that peppered Shea’s huge scoreboard. He hit them off the big Budweiser ad and high up on the Mets’ lineup listing, with one reaching as high as the No. 2 slot — Paul Lo Duca’s name. If you’re going out to a game involving the Reds, don’t miss Dunn during BP.

The National League East just looks weird. I’m a Mets fan, and I can’t believe what I’m seeing. It was one thing in April and May, but we’re at June 21 now, 10 days from July and 11 from the announcement of the All-Star teams.

And the Mets are 9 1/2 games up in first place, with the Braves mired in last and currently amid their longest losing streak in 17 years. The Mets are playing their 71st game tonight — “it’s still early” is just 10 games away from being halfway through the season.

But what stands out to me is the Marlins, in third place, with a 30-37 record. They’ve won nine in a row and may be the hottest team in baseball right now.

It won’t last. A year ago, the Washington Nationals stood in first place at the All-Star break, and pretty much went nowhere but down from there. Even more so than those Nationals, these Marlins are young and inexperienced. They’ll fade because they haven’t played together in a long season like this. They’ll tire in August, they’ll stop winning close games.

At least they’ve shown some spark, and perhaps that, all along, Joe Girardi was the true managerial prospect on Joe Torre’s bench, and not Lee Mazzilli. Perhaps they’ll get their ballpark deal, move out of Miami and into the suburbs, and bring the fans back. But they won’t finish in third place in the NL East.

And the Braves won’t finish last.

Finally, on Sunday, Jon Stewart spent Father’s Day at the Mets game and was interviewed on the local broadcast. It was a funny interview that can be seen via the link on Sunday’s game story.

« All is Wright with the Mets
Griffey redux »