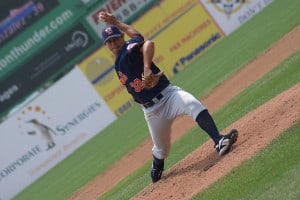 I wasn’t planning another post today, but then the long-rumored news that Ottawa’s attempts to bring in a Double-A club in 2013 might mean the end of the Binghamton Mets seemed to become a reality. So that sparked some speculation on Twitter of where the affiliations would end up. For some reason, affiliations in minor league baseball and the shuffling (sometimes scrambling) that happens every two years intrigues me as much as free agency in the offseason. Maybe more. It might stem from the 2002 shuffling period, when I reported on the Red Sox and Trenton Thunder ending their affiliation, opening the door for the Yankees to swoop into Mercer County Waterfront Park.

But I wasn’t satisfied with discussing this latest news 140 characters at a time, so I went to look up the most recent info on when the player development contracts are up around the minors. Binghamton is one of those expiring after the 2012 season, as is New Hampshire — the current Blue Jays affiliate in the Eastern League. And with Double-A baseball back in Canada, the prevailing speculation is that the Jays would move their affiliate to the new Ottawa franchise. (For his part, Blue Jays GM Alex Anthopolous is denying any interest in Ottawa, but that’s no surprise considering that, at the moment, there is no team there and his club is under contract with New Hampshire.)

Should Toronto and Ottawa team up on a new PDC, the Mets could potentially move their Double-A affiliation to New Hampshire. Another possibility proposed is that the Twins might leave New Britain for New Hampshire. Minnesota has had its Double-A club in the Hartford suburb since 1995, but maybe the Twins would trade Rock Cats for Fisher Cats and move to the newer facility (opened in 2005) up in Manchester.

Here are all the Double-A affiliations that expire after this coming season, in order from the longest relationships to the newest. In some cases, the relationships go back longer than the franchise has been in that location. For example, the Royals have been in the Texas League since the club was in Wichita in 1995, but it moved to Arkansas (somewhere in the northwest part of the state, I think) in 2008:

Now, based on the relationships and/or location, a few thoughts — with no background or first-hand info; these are just gut feelings — on which affiliations are most likely to be renewed or not:

*I put the Nationals-Harrisburg relationship here because the Pennsylvania capital is a comfy 120 miles from D.C., farther than only low-A Hagerstown and high-A Potomac in the Washington system. However, with the Harrisburg ballpark prone to flooding (it being on an island and all), the Nationals could very well decide they’d rather not have their players in that environment. They could easily choose Richmond (107 miles away) instead.

Comfortable Marriages (likely to re-up on account of not having an option that much closer to the parent club): Twins (New Britain), Cubs (Tennessee), Padres (San Antonio), A’s (Midland), Angels (Arkansas). Congratulations, Oakland! You have the western-most Double-A club in baseball! I can’t imagine any of the West Coast teams would want to get out of the Texas League — and I imagine the Giants would love to get in there — but it tends to be a case of musical chairs. As for Minnesota, they could try to get a Midwestern affiliate in either the Texas or Southern Leagues, but since both of those leagues are entirely below the Mason-Dixon Line, those cities wouldn’t be that much closer to Minneapolis than any Eastern League cities.

In a Rut (probably stuck, even if they wanted to move): Brewers (Huntsville), Mariners (Jackson), Diamondbacks (Mobile), Reds (Pensacola). Maybe Milwaukee would like to get one of the Tennessee clubs, putting its Double-A affiliate closer to both the parent club and the Triple-A club in Nashville. And the Mariners might like to get into the Texas League, but they’d have to usurp one of the California clubs from that circuit. The Reds’ affiliate moves from Zebulon, N.C., to the Florida panhandle after a three-city franchise shuffle that saw the Carolina Mudcats (previously the Reds’ Double-A Southern League affiliate) slide down to the high-A Carolina League, replacing Kinston, N.C., which is now without a club for the first time since the 1970s.

On the Market (three or four that are most likely to be shuffling come September?): Mets (Binghamton/Ottawa), Giants (Richmond), Blue Jays (New Hampshire), Twins (New Britain). All have been discussed above, and the Blue Jays and Twins — listed in two categories, on purpose — are really only here because of that speculation regarding the Ottawa franchise. Maybe everyone will be happy where they are and Toronto, Minnesota and San Francisco will all re-up, leaving the Mets in Ottawa (not too far from Buffalo, if the Mets renew with their Triple-A club — no sure thing, but that’s another post). The Giants have been in the Eastern League since 2003, when the affiliate was in Norwich, Conn. The franchise moved to Virginia before the 2010 season. But you’d have to think there’s some interest in moving west, even if the options aren’t that much better. Ideally, I’m sure the Giants and Mariners would love to find a way to expand the Texas League by two franchises, but that would have to be at the expense of either the Eastern League or Southern League.

One other point: As mentioned in the ESPN New York post linked at the top of this post, Binghamton would likely continue to host an affiliated team in 2013, drawing the Batavia franchise (currently a Cardinals affiliate) from the New York-Penn League. As mentioned in the Ottawa Citizen,

The Batavia franchise has been on the selling block for years. The community owned Muckdogs, playing in the smallest venue in that league, have constantly lost money while being operated by the Triple-A Rochester Red Wings.

That also may be another post. But no matter how it all comes down, it looks like we’re in for some franchise movement — and new logos, uniforms and team names — in addition to the usual affiliation shuffles this fall.

« ‘Who’d you get!? Who’d you get!?’ Opening those first 2012 cards
The random baseball player in Bruce Springsteen’s ‘We Take Care of Our Own’ video »