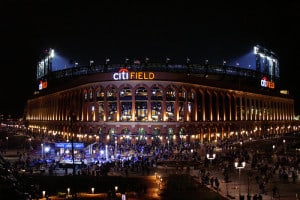 The Mets’ home opener this year was a night game because the team preferred to play the game on a Monday and leave Tuesday open, probably for two reasons: To hold its annual Welcome Home Dinner and to have the flexibility of pushing the game back one day in the event of rain. That way, fans who bought tickets specifically for the home opener would have them, rather than those who bought tickets for Game 2 of the season lucking into the first game at the new ballpark. 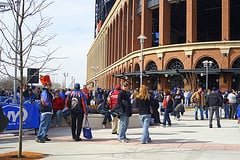 By choosing Monday, the Mets were told it had to be a night game because their opponent, the Padres, played on the West Coast on Sunday. MLB or the Players Association (or both) would not force San Diego to play Sunday afternoon in California, fly to New York that night and play the next afternoon.

Too bad — it probably would have worked out better for the Mets if they had. 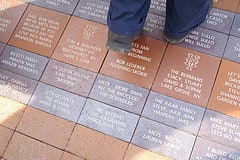 So it didn’t quite feel like Opening Day in New York on Monday. I didn’t have to get up too early after working Sunday night; I didn’t have to be ready to go when my mom arrived at the house. The Mets were opening the gates at 4:30, two and a half hours before first pitch, so we were in no rush. Figures that we arrived in Manhattan with no delays and found free street parking on the first block I turned onto. Our wait on the 74th St. platform in Queens was long because we just missed a departing 7 train, but we still arrived at Willets Point at 4:10, and the crowd outside the Jackie Robinson Rotunda was already filling up the fanwalk. 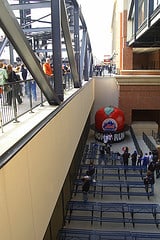 Of the 42,000-plus fans who attended the sold-out opener, probably half that arrived before 6 p.m. When we walked in, we made our way around the field level concourse to make our way to Danny Meyerland behind the scoreboard in center field. Mom wanted a Shake Shack burger in her first Citi Field experience, and who was I to suggest otherwise? We crossed the Hell Gate Bridge, gazed upon the old Home Run Apple, and waited a mere 10 minutes for a pair of perfect burgers, fries and two beers. We shared a picnic table with an older father and son and, once finished, continued our walk around the field level.

The temperature hovered in the 50s, but the warm sun made it feel like a pleasant 60-something. If only it had been a day game. In the end, though, whether it was a truly mild night, or the roof over our heads in the upper reaches of the Promenade level kept some body heat in, or the park’s construction cuts down on the wind gusts coming off the bay, I walked out of there at 10:30 feeling the warmest I can remember after attending every Mets opener — all of them day games — since 2000. 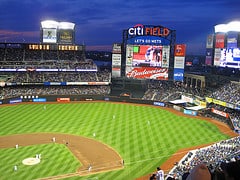 Overall, there was a weird feeling to the game. Yeah, it was the Mets’ first official game back in New York since last September, but with the St. John’s-Georgetown game (which I attended) and the two Red Sox-Mets exhibitions at Citi Field (which I did not go to), this one didn’t feel quite as significant. Maybe the late date played a part, and the fact that Spring Training went so long and included the somewhat meaningful games of the World Baseball Classic put me in midseason form back in March. But despite the significance of the game, I didn’t have the Opening Day butterflies of anticipation I usually have.

Yet at the same time, once Mom and I climbed up to our seats, I didn’t want to leave. I got hungry later, but didn’t bother to go get the nachos I was interested in trying. We had peanuts with us, but I didn’t feel like waiting in line for a beer. I didn’t want to miss much of the action, so I’ll save more exploration and taste testing for future games.

It wouldn’t be a Mets game, though, without the bitching. Fans behind me, fans in the bathrooms, fans on the concourse — they all found something to whine about. Yeah, the concourses were a bit crowded, but that’s to be expected for the first game in history. Not many of the 42,000 tickets went unused, I’m sure. Now imagine 15,000 more people at Shea, where you couldn’t see the field from any of the concourses (with the exception of behind home plate on the limited-access field level), and Citi’s walkways are boulevards. 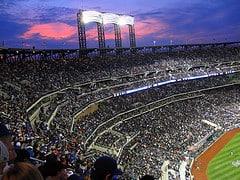 Exiting is a bit cramped, with thousands of people making their way through relatively narrow doorways to descend switchback stairways, but again, nearly 42,000 people waited until the last out, not wanting to miss the potential for a comeback. There won’t be too many games in which 98 percent of the people in attendance go the distance. There are always the early exiters, those who want to beat the rush to the subway, the LIRR, the parking lot. That’s the only thing about which I would raise even the slightest gripe.

I’m sorry — as much as I enjoyed going to games at Shea, the new place is better. It was needed. It was time.